Glasgow Celtic, Corinthians, Thai Port, Dynamo Dresden, AEK Athens, PSS Sleman…. you may well disagree with this list, but the sheer strength of character of some professional Football clubs around this fine planet bestows upon them a status and image that transcend the norm.

These are the clubs that consistently entice supporters out of their hovels on rain-soaked February nights – regardless of which players are on the team sheet, what position they occupy in the league or indeed what tier of domestic Football they find themselves in – just for the sake of being able to lose themselves for two hours in a fan culture that immortalises the legends and legacies of fellow supporters that have come and gone. These are the clubs that every other fan in the country has an opinion about, be it one of admiration, of reverence, of jealousy or of vitriol. When it comes to these clubs, there is no in-between. Playing them away is a thrill. Playing them at home is a challenge. Hopping their ground is a right of passage.

Most countries can boast at least one professional club that fits this description. Some countries, such as Spain, arguably boast several. And on the Iberian Peninsula, among the La Liga mega-stars, regionalist scapegoats and political war cries, exists a club that consistently garners attention from the country’s ultras and journalists no matter how low it tumbles down the league structure; Real Club Recreativo de Huelva. 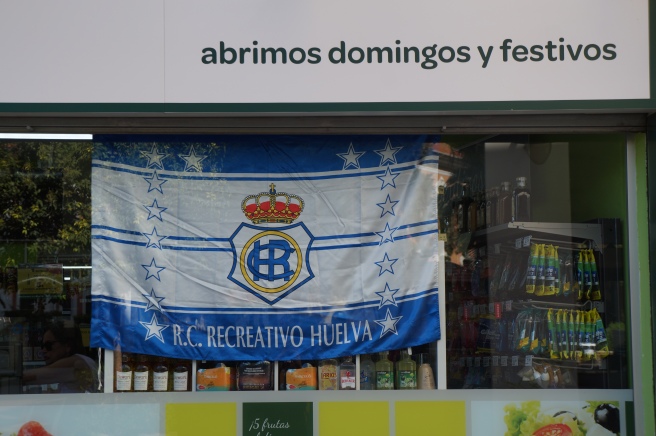 Recreativo shares conspicuous similarities with FC Hansa Rostock, another candidate for the list above. Both are professional clubs that compete primarily in blue, white and red whose erstligist days are definitively behind them. Both are located on the shores of a body of water that has defined their respective city’s economic past and their population’s relationship to the wider world. And fans of both have a significant reputation for confrontation and, let’s say, inconvenient political affiliations. But where they differ (briefly ignoring the rather large domains of language and climate) is longevity. Hansa was founded in the 60’s under the auspices of the Sozialistische Einheitspartei Deutschlands in Communist East Germany. Recre meanwhile holds the title as Spain’s oldest surviving professional Football club.

Taking nothing away from the strength of support that Recreativo enjoys (now in La Segunda B – the third tier of Spanish Football), the club’s status as “oldest in Spain” is definitely a prominent factor in its emergence as a groundhopper-favourite. Founded in 1889 by a pair of British miners, the club has the legs on hundreds of major names in European professional Football that have had the pleasure of going toe-to-toe with El Abuelo. What’s more, the open terraces of the colossal Estadio Nuevo Colombino on the banks of the Odiel River just before it joins the Atlantic provide a spectacular ambiance and a thousand photo opportunities as soon as the sun begins to set on game day. With such an intoxicating combination of history, situation and tradition, it is difficult not to acknowledge the appeal of Real Club Recreativo de Huelva, even if you are a die-hard Cádiz or Sevilla supporter.

Be that as it may, recently published research may be uncomfortable for Recre fans. While Huelva does indeed boast Spain’s oldest continuously running Football club, there is another city in the country’s southwest with historical British connections whose sons and daughters (but mostly sons) were kicking Footballs around its streets for almost a full two decades before the now legendary Recreativo was established.

Jerez de la Frontera is a city like no other in Spain. While its exotic name betrays its former strategic location in the 13th century during the Catholic reconquest of the peninsula, its cobbled streets, smokey tabancos and pale brick walls echo with the sounds of horse hooves and wistful, melancholy song. To Spaniards, Jerez is synonymous with three things; Flamenco music, equestrianism and fortified wine. While the first two institutions are no doubt central to the local culture, the latter has dominated Jerez’s economy for centuries.

And as you wander the enchanted streets between the city’s mystical sherry bodegas, getting high from the pungent yet delectable aroma of hardworking yeast, the names of the pioneers of wine manufacture in Jerez spring out at you. Harveys…. Williams…. Byass…. Humbert…. it is easy to identify where the demand for the city’s sublime fortified wines came from. However, the work of local Football historian Ernesto Alba Reina would suggest that the British contributed more to the culture of Jerez than just expertise in wine manufacture in the 19th century.

The very first written account we have of Football (as we know it today) organised and played in the Kingdom of Spain dates the momentous occasion back to the 1st of November 1870. The British aristocracy of the Victorian era frequently sent merchant ships to Andalusia to stock up on the city’s excellent finos, creams and moscatels. The Brits doing the actual work of sourcing and transporting the wines would spend time in Jerez itself. Any movement of people on a significant scale has historically resulted in the spread of ideas, customs and traditions, and the British presence in Jerez de la Frontera in the mid to late 19th century was no different. The edition of “El Progreso” newspaper published that day makes several references to polo, to cricket, and to another sport previously undocumented in Spain; “Football”.

A full 19 years before the creation of Real Club Recreativo de Huelva, we have evidence of residents of Jerez (British and Spanish alike) pioneering the team sport that would later become a major interest for the population of the entire country. What’s more, the game referred to in this article took place a full 3 years before the first recorded Football game in “Riotinto” (a reference to the land on the banks of another of Huelva’s rivers) was played.

Long before the sport became famously popular in Biscay and Barcelona, Spain’s love affair with fútbol first found its roots in Jerez de la Frontera. Is this likely to change the popularity of Recreativo de Huelva, “Spain’s oldest Football club”? No. Jerez’s two most popular clubs, Xerez CD and Xerez Deportivo FC, were founded 75 and 7 years ago respectively. Meanwhile, Jerez’s oldest continuously active Football club, Jerez Industrial FC (previously founded by Englishman Thomas Spencer as “Sociedad Jerez Foot-Ball Club”), has never had the ability to attract crowds like the other two have in recent times. However, this research is undoubtedly a sore for Recre fans, due to the mutual dislike they have with xerecistas on the grounds of opposing political affiliations.

One thought on “Spain’s Surprising Centenarians”