This weekend would have marked the beginning of the Feria de Jerez; the annual celebration of the various traditions that collectively define the intoxicating Flamenco culture of Spain’s south. Horsemanship, Sevillana dancing, delicate guitar playing, melancholy singing and – of course – sherry are all consumed in abundance by locals eager to revel in the cultural vibrancy of their ville. Coincidentally, today marks two months since the FBTG team last attended a Football game, which happened to be the biggest game of the 2019/2020 season played in Jerez de la Frontera. Though it may seem unlikely – both institutions carry the civic traditions of Jerez.

The city is of course known for its fortified wines. The hardy, chalk-heavy soils of the region have been used to cultivate specific grape species for wine production for millennia. Evidence dating back to the Phoenician era 3,000 years ago speaks of a town called “Xera” known for its viniculture. The conquering Moors in the 8th century would rename the city “Sherish”; the origin of both the Spanish name of the city and the English language word for the fortified wines that it would continue to produce.

The anglophone imperialists developed a strong taste for sherry, importing the stuff in enormous quantities. The Duke of Wellington was apparently a big fan, and Charles Dickens is reported to have fed a thimble of sherry to his pet budgerigar each day. In return for a continued supply of divine liquids that provided such merriment for generations, the English gifted the people of Jerez with an equally reliable source of pleasure for years to come. The first record historians have of Football being played on the Iberian Peninsula comes from Jerez de la Frontera in 1870. Courtesy of a certain Mr. Thomas Spencer, an employee of the prestigious sherry bodega Williams & Humbert, the city got its first Football club in 1911. “Sociedad Jerez Foot-Ball Club” eventually became known as Jerez Industrial FC, a regional-league club that still competes to this day. 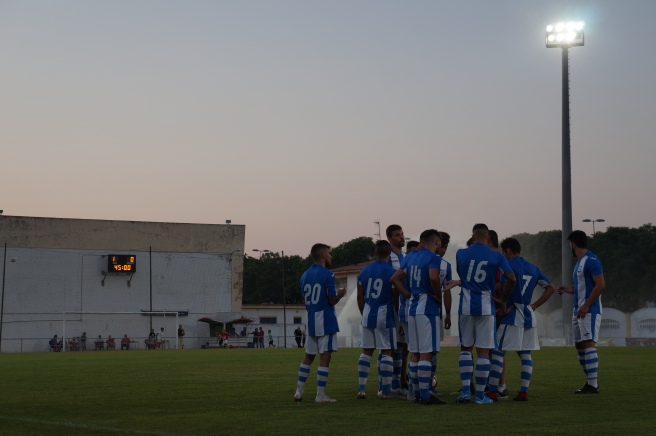 Spain found Football through Jerez de la Frontera. The city’s delightful fortified wines attracted the interests of the British, who inadvertently taught the locals how to play, who in turn developed an inexhaustible appetite for the People’s Game. Though Jerez has never been a heavyweight in domestic Spanish Football, the sport has without doubt been an integral part of the culture of the people of the city throughout the 20th and 21st centuries. As such, sherry is (and always has been) irrevocably linked both to competitive Football played in the city and of the Feria de Jerez.

Xerecismo is the term given to the Football fan traditions of the city. And though it is the oldest surviving Football club in the city, it is not Jerez Industrial CF that best embodies xerecismo. That honour goes to Xerez Club Deportivo. Formed in 1947, Xerez CD is the only professional club of Jerez to have played in La Liga. The city’s La Liga duck was broken in the 2009/2010 season. In spite of courageous performances, Xerez CD finished in 19th place that season and was immediately relegated back to La Segunda. No club from Jerez de la Frontera has competed in La Liga since.

It was at the end of that season when the wine began to sour. The club’s management had invested heavily in a cadre of top players and struggled to pay off mounting debts over the next several years. The ultimate humiliation for xerecistas came in 2013, when administration obligated Xerez CD to drop not one but two tiers down the league structure to compete in the Tercera (oddly named, as this is the fourth tier of Football in Spain).

This was far too much for thousands of xerecistas. With their pride in tatters at the hands of an inept managerial board, many felt that it was their responsibility to make el xerecismo noble once again. A breakaway faction lead by members of ultra group El Kolectivo Sur rallied together to found a brand new Football club that could continue to carry the proud traditions of xerecismo. The style of support was to be similar. The colours were to be identical. A similar club badge was designed. In almost every regard, the new club was to replace the old club yet allow the city’s traditions to survive. Its investors and founders – every day folk simply trying to do what they thought was best – anticipated the old Xerez Club Deportivo to fold under the burden of unpayable debts, which would allow the new club “Xerez Deportivo Football Club” to occupy the former’s vacant position in the 2013/2014 La Tercera Group X season.

A mere 5 days after the new club was formed, the owner of Xerez CD announced a takeover of the old club. The new owners wiped the debts clean and saved the club from administration – at the cost of the individuals who had invested their time, effort and money into the creation of Xerez Deportivo FC that could no longer compete the upcoming Tercera season. The new club’s founders had had enough. Refusing to admit defeat, they threw two fingers up to the management of Xerez CD and opting to embark on their new voyage in the 8th tier of Spanish Football.

7 years and multiple broken records later, Xerez Deportivo FC is competing in the Tercera Group X – along with Xerez CD. These are the two clubs claiming to be the true representatives of xerecismo and of the true history of Jerez’s Football culture. And it was at the competitive meeting of these two in El Chapín, the spiritual home of xerecismo, where the FBTG boys last watched Football before the pandemic struck. With the new club chasing promotion and the old club still clinging on for dear life, this year’s Sherry Derby was the biggest ever.

Though various different grapes are grown to produce sherry, bodegas often blend them in varying proportions to produce sweater “Creams”. Though each can make a perfectly fine wine in their own regard, one batch of wine will occasionally be blended with another to form a drink that is greater than the sum of their equal parts.

On the 23rd of July 2015, fans of both clubs attended in a joint assembly in Jerez to vote on the matter of the day; reunification. As the directors of Xerez CD and Xerez Deportivo FC discussed a potential merger, the fans of both clubs were given the ultimate choice. Fans of Xerez Deportivo FC voted overwhelmingly in favour of a merger – both of the clubs and of the warring factions of xerecistas. But fans representing Xerez CD voted against the motion.

As such, it is therefore perhaps fitting that it was Xerez Deportivo FC – the club founded and owned by fans to protect xerecismo from corporate interests – that won this year’s Sherry Derby, 2-0.

4 thoughts on “The Sherry Derby”