If you have heard of just one Indonesian fan group, it will be Brigata Curva Sud of PSS Sleman. BCS have received a modest amount of attention within the Football blogosphere but their global exposure falls tragically and undeservedly short of Dortmund’s “The Unity”, Celtic’s “Green Brigade” or Juve’s “Drugi” etc, probably because they have the clear disadvantage of not being European. However, their story and its wider ramifications for Football Culture deserve to be heard.

If you know Brigata Curva Sud, you probably know that they are the fan group with such a huge following, they actually sponsor PSS Sleman. Ultras and fan groups selling their own branded merchandise as independent commercial entities is nothing new in the world of Football fan culture, but the majority of these Ultras and fan groups use profits and revenue to fund fan activities, such as tifos (in theory). Brigata Curva Sud use their profits to keep the cogs turning in the pillar of the Sleman / North Yogyakarta community; PSS Sleman. This means that the fans represent 2 different stakeholders of the club, and that commercial and fan interests are aligned. PSS Sleman management have less to fear from raucous fan behaviour because their sponsor won’t be discouraged. But this is possibly all you know. Other blogs have painted the oversimplified picture of Ultras that have become so big that they have managed to sponsor their club. Brigata Curva Sud is more complicated than that.

One of Java’s magnificent 2 hour sunsets slowly casts rays of pink and orange across the dusty lane, as an elderly woman trudges past carrying twice her own body weight in a wicker basket. Reza of BCS absentmindedly taps his feet against his fading sandals while he reminisces about the Early Days.

“At first they thought that we were an enemy, so we had many fights”.

No, this is not the club owner’s reaction to the formation of Brigata Curva Sud. This was the reaction of Slemania, PSS Sleman’s older Ultra group; “We have a different culture. We don’t agree with violence among supporters. We had an agreement to move away from Slemania. We started with 30 members. At first it was so difficult, but after a long time many people wanted to join us. We could not name it “Ultras”, so we made 1 name to unite us: Brigata Curva Sud”. You read that right. A fanatical fan group rejecting the “Ultra” moniker and promoting non-violence among fans. 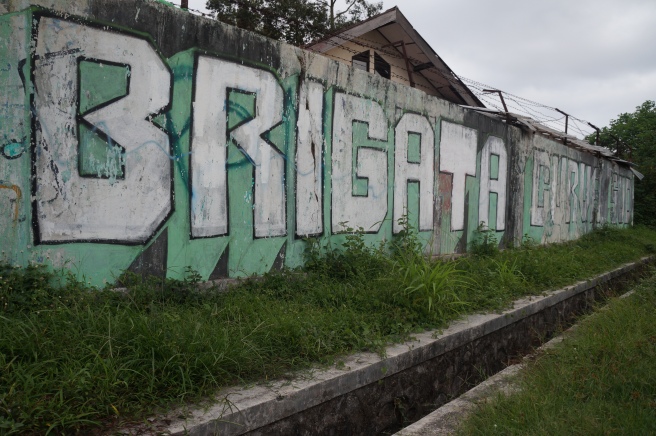 Founded on May the 20th 2011, Brigata Curva Sud has a political agenda, much like many other Ultra groups, but it is not simply a case of Left or Right. We made reference to a Guardian article that chronicled violence between Jakmania of Persija and the Vikings of Persib to explain the scale of Indonesian Football hooliganism. Indonesian fans’ poor reputation was a big motivator in the early stages of Brigata Curva Sud. Reza takes time to express how BCS continuously work to emphasize focus on your own support instead of mindless antagonism toward opponents. Even when cross-town rivals PSIM Yogyakarta goad the Sleman fans, as he puts it, the response is to rise above. “We don’t care what they think of us. The show must go on”.

Persisolo is another traditional rival of PSS Sleman (Yogyakarta and Surakarta “Solo” having been adversaries and rivals for centuries- think Manchester & Liverpool, only with less emphasis on economics and commerce). But BCS have developed stronger relationships with Persis Solo fans in recent years to avoid violence when the two teams meet. The same cannot be said for PSIM Yogyakarta fans’ attitude toward Persis Solo. Brigata Curva Sud are proactive in doing their bit to curb Indonesian hooliganism by simply setting an example while still creating an incomparable stadium atmosphere. This is what members partially define as a “different culture” on the terrace. They feel their shift of focus from aggression to creativity warrants a different title to “Ultra”. That creativity can be seen in fan sticker, banner and flag designs and in the elaborate tifo displays that PSS Sleman fans create. Sleman fans are in no way unique in Indonesian Football in this regard, but BCS believe that said creativity and tifos play a more central role in their game day traditions and culture compared to fan groups of other teams.

So yes, Brigata Curva Sud is indeed a fan group. But it is also a political movement and now a commercial enterprise with a philanthropic purpose. This combination has quickly established PSS Sleman as something of a cult club. Brigata Curva Sud are now probably more powerful than Slemania, meaning that their support culture has become synonymous with the club. It is becoming the choice club for foreign groundhoppers and Football enthusiasts visiting Indonesia, aided by pretty Yogyakarta’s popularity with tourists. The objective of Brigata Curva Sud was not to build a new fan model at all. BCS simply responded to a lack of commercial interest in their club by using their own profits to keep PSS Sleman alive; “Sponsors don’t like to sponsor small clubs. It is difficult in Indonesia. Our members support PSS Sleman with the sale of merchandise”. PSS Sleman currently play in the Indonesia Liga 2, unappealing for potential sponsors. 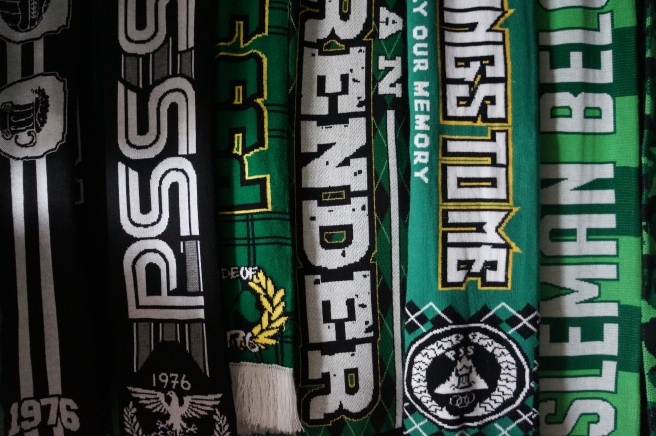 However there is one negative characteristic typical of Indonesian society and sadly Football that BCS are struggling to fight against. The perceived institutionalised corruption of Indonesian Football has them stumped. The current bad guys in the eyes of fans are PSSI, the official governing body of Indonesian Football. The recent suspension of games was a big financial and psychological drain on clubs and fans, with protests up and down the long country in a tit-for-tat fashion against behaviour that fans cannot prove perpetrated by an agent with whom fans have no bargaining power. We will avoid pointing the finger here for legal reasons and save the recent political conflict for a future post, but Reza’s words tell the story of how many fans currently feel; “We have no power, no man behind us. So difficult for us. We cannot do anything”.

Reza’s reserved personality and instinctive tendency to take his time explaining make it difficult for him to be direct. But in this case, he doesn’t need to be. His exasperation and fatigue are tangible.

This is where FBTG is trying to do its bit. We hope that in bringing you this story, we can spread the word about fan initiatives against the negative forces in Football worldwide to inspire you to take action to keep your club’s tradition alive and out of the hands of business, commerce and corruption. By making a purchase at the BCS shop and writing this article, we are showing appreciation for a revolutionary fan model led by individuals with the correct values in life against the evils they face. Long Live Brigata Curva Sud, the fan group not just taking the fight to anyone they need to, but also picking the right fights.