The Greek flag flew high over the Quadalquivir river on Thursday as Real Betis’ successful Europa League endeavours continued. The verdiblancos of the Estadio Benito Villamarin were playing at home to former Greek Super League Champions Olympiacos FC. A large away following had made the journey from Athens to Seville and to a stadium in a region that, by sheer luck, happens to have an odd connection with Ancient Greece. 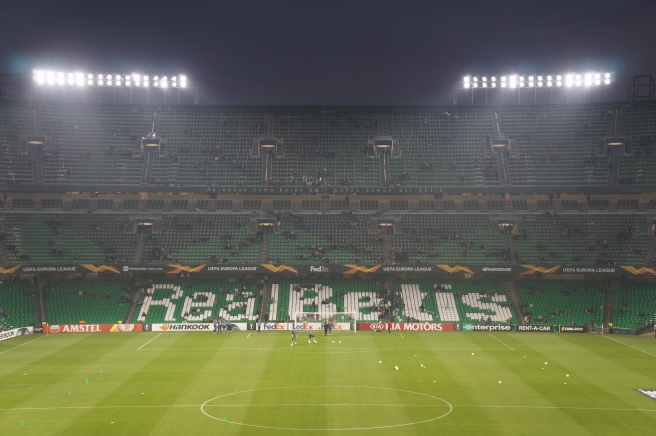 Olympiacos fans themselves are no slouches. They are known for their passionate and occasionally extreme support, and the club’s leading Ultra group “Gate 7” certainly have a story to tell. A large police presence was visible around the city throughout the day, as were the Greek visitors dressed in red and white fan merchandise. Prior to the entry of any fans into the Estadio Benito Villamarin that evening, there was an edgy atmosphere. Groups of Olympiacos fans were very visible in the city during the day, but their dislike of the green and white colour scheme resulted in quite a few cases of aggression being hurled at passing Betis fans. Their great rivals Panathinaikos were nowhere near at the time, but it mattered little to the travelling Olympiacos supporters, who used Real Betis fans as surrogate enemies thanks to their shared playing colours of green and white.

Gate 7 and the Olympiacos away support should’ve enjoyed their time in this most extraordinary of cities as much as possible before the sun set, because they were given little to cheer about during the match. They did indeed make a good deal of noise for extended periods; their efforts were met with whistles and jeers from the home fans, who in turn were treated to a mindless chorus of “Puta Betis! Olé, olé, olé”. However something initiated a brief period of physical confrontation in the away block during the first half. Police officers in full riot gear entered the block and separated fans before, in my opinion inevitably, striking fans with batons. The fray lasted several minutes after which Olympiacos fans backed down. The officers remained among the away support for the remainder of the game. Little further noise was generated from the Greek guests. Betis won the match 1-0. 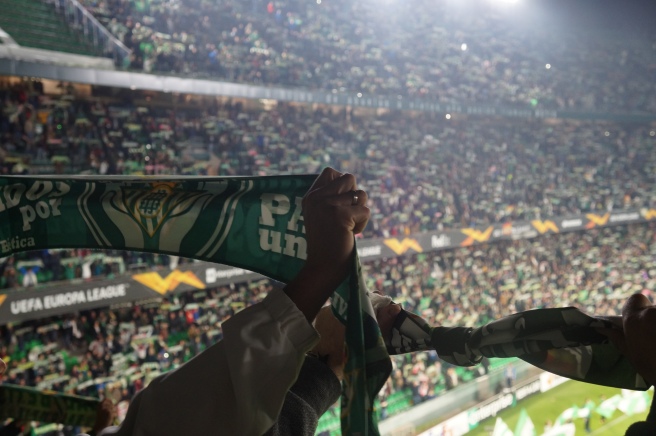 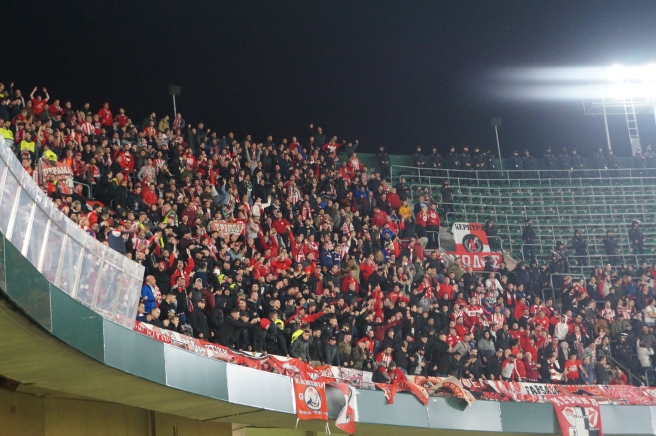 It’s a shame that the visit of Olympiacos fans to Seville will be remembered negatively by many people that night. It takes a fine and inquisitive eye to observe that Andalusia, the autonomous community of which Seville is the capital city, and Real Betis share Olympiacos FC’s connection with the ancient world.

I do not need to point out to you that the name “Olympiacos” makes reference to Ancient Athens and the fabled Mount Olympus, from which we get the Olympic Games. If you didn’t work that out, you need help. The club’s location in the Piraeus old town of Athens means that a representation of Ancient Greece in the club’s make-up is entirely appropriate. However, you may be unaware that the flag of Andalusia features a depiction of the Greek legend Hercules standing between the two Pillars of Hercules which, according to legend and not so much to archaeology, straddle the Straits of Gibraltar. One pillar stands on the African continent, the other in the South of the Iberian Peninsula, a.k.a. Andalusia. The autonomous community of Andalusia makes reference to the most legendary Ancient Greek figure of them all in its very flag, bizarrely connecting the region’s identity to that of visiting Olympiacos fans on Thursday.

What’s more, Real Betis has appropriated the Andalusian colours in their playing kits, as many identify it as the leading Football club of the Andalusian people. The Estadio Benito Villamarin is located in the “Heliopolis” neighbourhood of Seville. This Greek name for an admittedly Ancient Egyptian settlement is a further connection that Real Betis can claim to have with ancient Mediterranean civilisations.

The two clubs playing against each other that evening both take inspiration and pay tribute to the ancient world, albeit with differing degrees of subtlety. However, I can only wonder how many other spectators that day were away of such trivia….

22 thoughts on “The Olympians At Heliopolis”