Surely most fans would be prepared to queue for multiple hours to purchase a ticket to see their team play in the later stages of the cup. The price/reward trade-off makes the decision entirely rational. But would you ever wait in line for hours to get your hands on a ticket to see somebody else’s team play for the first time?

I don’t get called a mug often. But on this occasion it might be justified.

It is 20 past 5 in the afternoon. Two gentlemen behind me have their noses pressed against a mobile device, keeping note of the Valencia score. The young lads in front of me impatiently hop from one tired leg to another. Now inside, I can feel that my face has caught the sun. After almost two hours of purgatory, a mere 10 feet lay between me and the ticket window. Then we get word that the card readers have broken and only cash payments will be accepted. 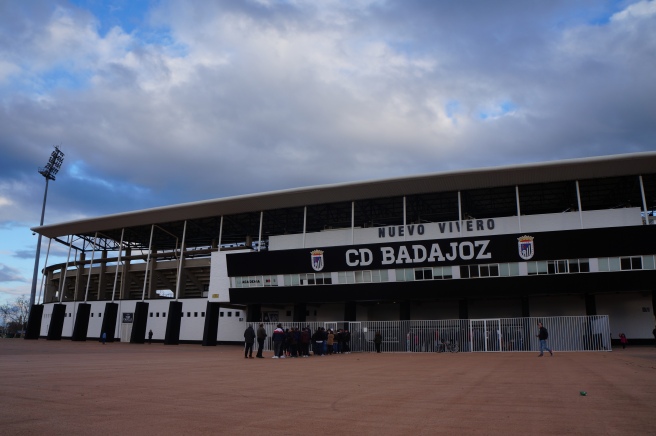 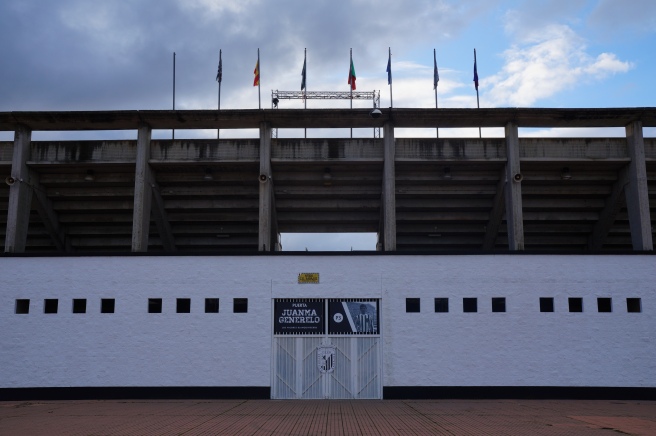 Ticket eventually safe in my jacket pocket, I walk back outside and up the steps. I address the hopeful late arrivals to the queue and draw an imaginary line through the air with my palm. “It is about two hours from here”. A man of about 40 leans forward anxiously. “And are they still giving preference to members?” I admitted that I was probably the only person who was there to purchase a ticket for the following day’s humble league fixture, rather than for the eagerly awaited mid-week cup-tie.

The gentlemen who had queued behind me were bemused by this behaviour;

“Listen, mate; you know you can just come back tomorrow and pay on the door, right? There will be many more windows open, and it won’t take as long”.

Having already queued for an hour, I stubbornly committed to waiting patiently for another. But to tell the truth, I actually wanted to remain in this queue, observing everyone around me. You see, there has been quite a positive buzz around Club Deportivo de Badajoz recently.

Little was expected of a Wednesday night sojourn 600 kilometres away in rainy Eibar, but an unfavoured CD Badajoz astonished a confident home side with a commanding 3-1 victory. The first division Basque side has certainly been no pushover this season, but Eibar looked permanently flat-footed compared to their visitors all night. For the visiting pacenses meanwhile, the shock but confident victory against an established La Liga team has inspired a palpable enthusiasm around the club- and an overwhelming demand for tickets for the round-of-16 clash against another mid-table first-division side, Granada CF. 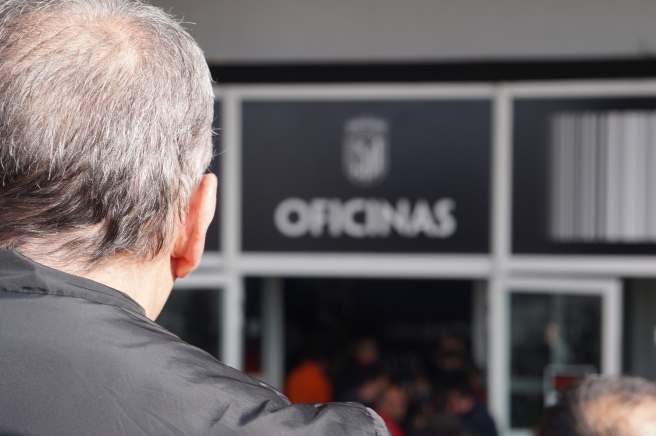 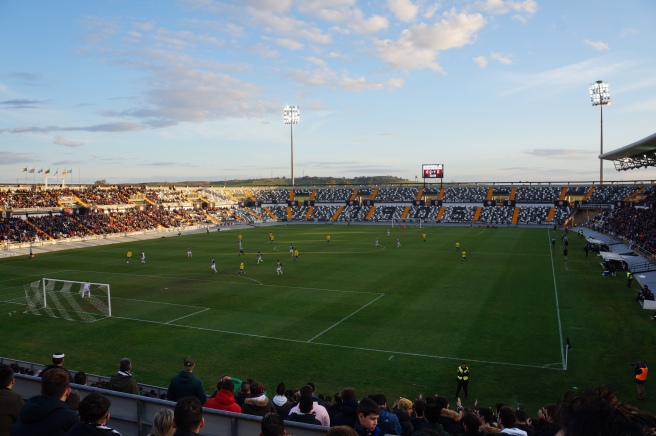 A traveler would always struggle to describe their arrival in Badajoz as spectacular. After a steady passage through rolling hills of scorched soil, the Badajoz central bus station and its neighbouring edifices appear entirely mundane. I had the fortune of seeing this provincial countryside in late January. Late rains had blessed the landscape with a lush shade of green that contrasted brilliantly against the burnt-bronze earth beneath. The view could have passed for a scene from the British Isles- were it not for the unmistakable shape of olive trees leaping out from among the rich, long grass. As pretty as it was, this landscape will not remain so verdant through the year.

Atop the city’s famous Moorish Alcazaba that same Saturday, my view of those same hills was punctuated by a grand Baroque church, medieval town walls, the pre-Columbian Puente de Palmas, the Guadiana River that flows under it onward to the Portuguese border 5 kilometres away and the city skyline itself. I continued along the river, following the sun southwest, passing Badajoz’s single skyscraper adjacent to the hyper modern Puente Real. I leave the town’s limits entirely before a black, white and grey bowl of concrete finally looms into view. Noticing a fever of activity by the main entrance of the Estadio El Nuevo Vivero, I inquired as to the possibility of purchasing a ticket on that day and subsequently found myself queuing for two consecutive hours, happily eavesdropping on the excited conversations of local fans.

Badajoz is the capital of an eponymous province within the state of Estremadura. As the name suggests, life for the extremeños has historically been extremely tough. Solid town walls built to discourage human invasion could not defend against ecological calamity in the 19th and the mid-20th century; widespread famine across Spain’s south took its toll on local populations who directly depended on agriculture. A popular survival solution was migration en-masse to the country’s more-industrialised corners, most notably Barcelona. Those that chose to remain dug in and became the bitter ancestors of the extemeños and pacenses (the Roman denonym of Badajoz) that surrounded me at that moment at the Nuevo Vivero. 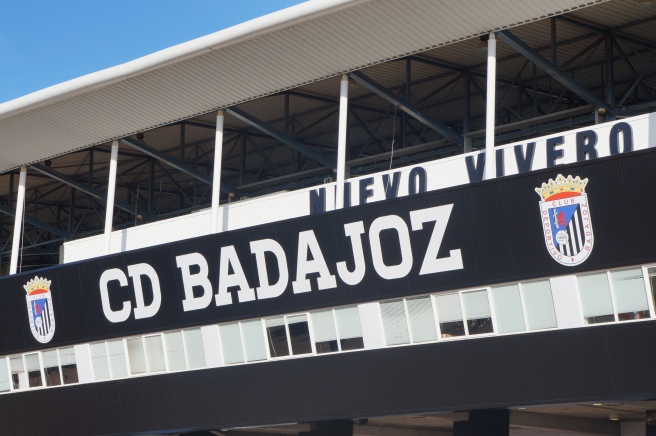 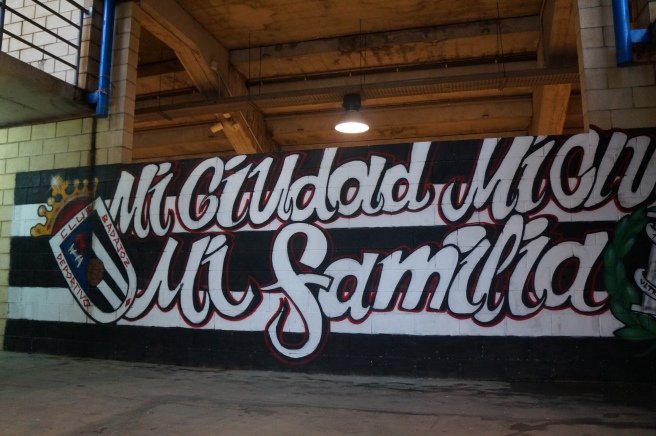 The modern world is almost equally unkind to the extremeños. Estremadura remains Spain’s poorest state when measured by GDP per capita. Locals earn on average 55% of what their compatriots in Madrid earn in a single year. Furthermore, the general impression that the rest of the country has of the extremeños is less than flattering.

“Oh, they think we are all idiot farmers. Stupid, uneducated, illiterate and with no links to the rest of the world”.

My car-share driver Diego took his time to explain the national stereotype of the extremeño to me during our two and a half hour drive back to Seville later that weekend. After dropping me off, he would continue for another hour towards Cordoba, where he now works and lives. “I wish it weren’t true”. Needless to say, Badajoz’s loss has been the gain of a city like Barcelona when it comes to Football. A city of only 150,000 inhabitants cannot be expected to compete consistently with the big boys. CD Badajoz currently lies mid-table in the Segunda B Group IV, one of four categories that collectively form the Spanish third tier.

And that is why it is all the more exciting that CD Badajoz progressed to the final 16 of the 2020 Copa Del Rey.

It is not difficult to appreciate the magnitude of the positive effect that a strong cup run has on the mood of fans of a club like CD Badajoz, nor on the general feel-good factor among the local population who have had seldom cause to celebrate their civic pride. However, when one takes a step back and looks at the full story with greater objectivity, the romance of this underdog story disappears painfully quickly. 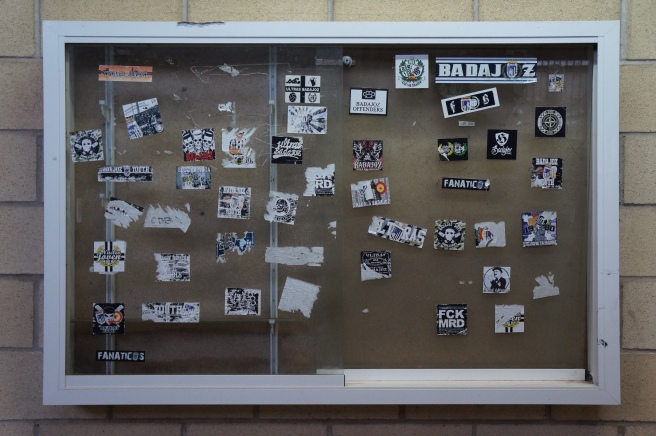 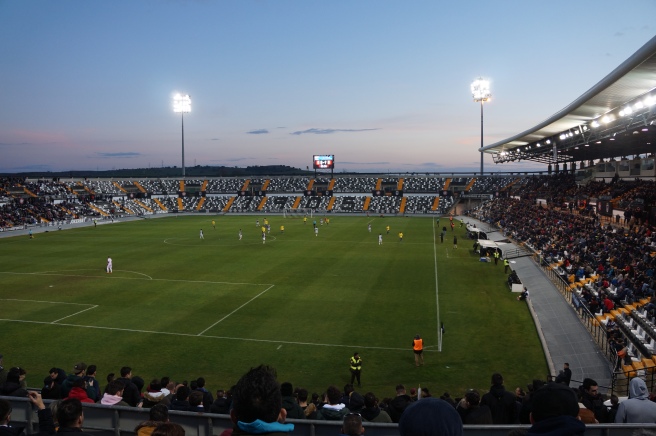 CD Badajoz’s Copa Del Rey victory away against first division side Eibar has not been the cup-upset story that has filled the headlines of the sports pages this year in Spain. In truth, it has been a season of upsets in the Copa Del Rey.

Real Betis fell apart in a penalty shoot-out against Rayo Vallecano. Cross-town rivals Sevilla FC underperformed against La Segunda outfit CD Mirandés, a club that went on to defeat Villareal in the quarter-final. Shockingly, the 2013 La Liga champions Club Atlético de Madrid capitulated against La Segunda B minnow Cultural Leonesa. And Spain’s big-two fell at the hands of Real Sociedad (away at the Bernabeu) and Athletic Bilbao respectively. These surprise results have attracted more attention from the country’s media, largely thanks to the fact that Badajoz, its leading Football club and Estremadura in general are of little interest to the majority of Spaniards.

CD Badajoz fans did not expect a repeat cup upset against fellow southerners Granada, and neither did they get one. A sellout crowd and a full-stadium tifo at the Estadio El Nuevo Vivero was rewarded with two goals for the home side, but ultimately a 3-2 away win for Granada CF saw the Andalusian side progress in the cup, who now stand on the edge of the final. 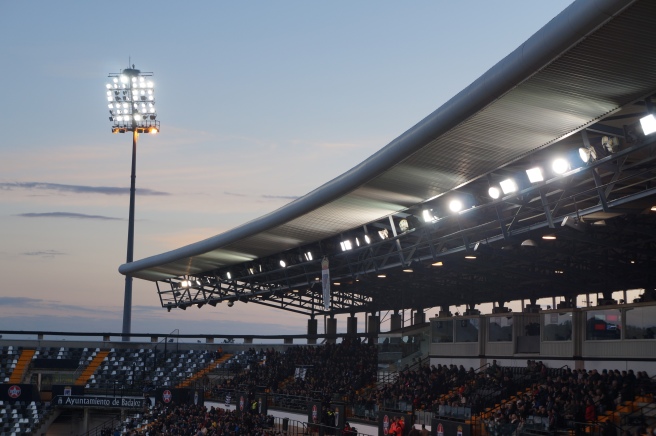 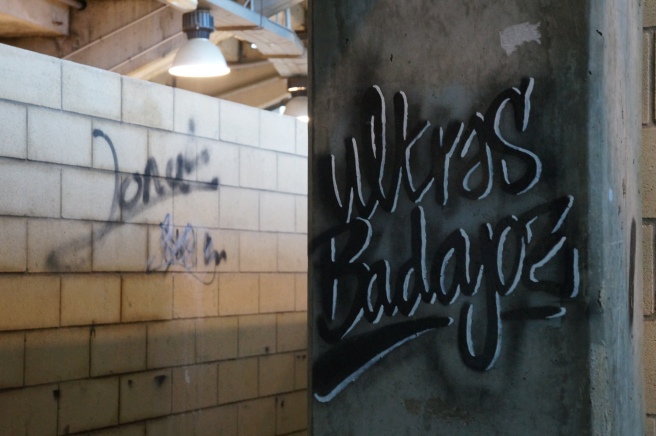 The league fixture I had travelled to Badajoz to attend was an equally unimpressive affair. A meager crowd of less than 9,000 spectators watched a dull goalless draw against the Cádiz CF reserve side that contained a heck of a lot of cheap dives and falls even by Spanish standards. Hastily painted celtic crosses and swastikas and the occasional “Refugees Not Welcome” sticker in the toilet block betrayed the political affiliations of CD Badajoz’s more fanatical supporters, yet the ultra block became entirely bored as the final whistle approached. Cádiz came the closest with an 86th minute shot to the post that was subsequently deemed offside anyway.

The death of romance is the price you pay for pragmatism and perspective. More often than not, the two distinct worldviews are mutually exclusive. The tragedy for supporters of a smaller provincial club like CD Badajoz is that their successes and victories must never be viewed in comparison to those of larger competitors. Loyal fans have every right to turn out in force for late-stage cup fixtures, but they know they cannot expect the outside world to share their enthusiasm in their club’s progression. It is extremely tough.

One thought on “Extremely Bad Boyz”