It isn’t often the FBTG boys wake up on a Saturday morning in the Netherlands. But when we do, we are seldom in a state to drive.

On our first Football-culture trip to the Netherlands, stadium tours in Alkmaar and Amsterdam were pleasant, but ultimately outdone by a rain-soaked yet brilliant Friday evening contest between SC Telstar and FC Twente and the Rabobank IJmond Stadion in IJmuiden. Mercifully back inside a toasty Altbau apartment in Haarlem three hours later, we shunned a night out and raided the fridge instead. The next morning, one of us discovered that local side Koninklijke HFC had a home league fixture in the semi-pro Tweede Divisie kicking-off in a couple hours, while the other searched for an effective hangover cure. A rock-paper-scissors contest made our decision for us. Groggily, we flung our jackets on and wandered to towards the ground.

After a couple double takes and an awkward conversation split between Dutch, English and German with an affable but apparently clueless local octogenarian, we successfully found the rather prosaically named Complex Koninklijke HFC. Forever failing to learn from our mistakes, we headed straight to the bar after having parted with a couple Euros at the gate. Bevvies sorted, we turned our attention to the matter at hand, and immediately ran head first into an unlikely, but obvious, question;

What is a Cossack?

With all due respect, I would wager that you too are familiar with the term yet otherwise fail to offer any meaningful description of what a Cossack is, or was, or does, or did. The name occupies a corner of the memory among useless facts from QI and the takeaways from tedious work-safety tutorials. You probably have a similar mental response to words like “Vandals”, “Uighurs“, “Emperor Constantine” and “Saladin”; a vague understanding that their actions some how shaped the futures of some people some place in the world that you are not terribly familiar with.

And to be honest, before reading Anna Reid’s “Borderland; A Journey Through The History Of Ukraine”, I would never have known either. But having recently finished this book, I can now happily address a question that has hung in the nether regions of my lower cortex for about a year and a half.

Perhaps “tribe” would be the easiest way to categorise Cossacks, though not in the usual sense we think of it. Cossack is not an ethnicity, nor is Cossackdom defined by any particular physical appearance. There is no Cossack language to speak of. No proper Cossack state has ever existed. Cossacks did not adhere to a single religion, nor did they produce great art or literature. In principle, anybody could be. or rather become, a Cossack. When we label Cossacks as a tribe, we are primarily referring to their patterns of behaviour.

Their heyday took place in the 17th and 18th centuries. These pony-tailed, mustache-wearing nomads from the Eurasian steppe traveled in covered wagons or lightweight vessels on the Black Sea. Given their disdain for agriculture, much of their livelihood depended on raids on wealthy settlements, stealing bounty and trading slaves across Eastern Europe. Cossacks were therefore viewed with fear by neighbourhing Poles, Lithuanians, Ottomans and Muscovites, who built fortresses to protect from invasion from the badlands of what we now call Ukraine where the hard-drinking Cossacks roamed.

Interestingly, many historians draw greater similarities between the Cossacks and the Wild West Cowboys of American legend than they do between Cossacks and Mongols. As uncivilised (in the classic sense) and destructive as the Cossacks certainly were, they are still viewed with a certain romance and nobility in the imagination and fiction of much of Central and Eastern Europe. My own theory of why this may be the case is that the Cossacks had their uses to Christians who later wrote the fables and tales that we are more familiar with today. The Poles in particular bought off the Cossacks, directing their aggression at the eternal enemy; the Ottoman Turks, whose ports and settlements most frequently came under Cossack attack. The godless Mongols are seen as savage and barbarian, but Cossack mercenaries conducting their own Crusades-for-cash against the Ottomans are granted a greater dignity in the public imagination of Christian Europe.

Having finally answered my obvious question 18 months after it had first been asked, I must now turn and address yours. Why, when recalling a semi-professional club Football match in Holland, did this blog post suddenly digress to talk about the Cossacks in a manner that would impress even the most scatterbrained and incoherent 5 year old child? Quite simply, the opposing team of the day was “Kozakken Boys”.

Kozakken Boys come from Werkendam, a sleepy residential town around 30 kilometres or so southeast of Rotterdam on the banks of the Nieuwe Merwede river. Though there does not seem to be much evidence of activity here before the 18th century, the ease of travel on this flat land and the river itself meant that foreign visitors were not unknown. And in the late 18th century, it was the forces of Napoleon who had made their presence known. Their successful Flanders campaign concluded on the 7th of June 1795 with complete control over what we now call the Netherlands.

The Dutch of the United Provinces (as it was known a century before then) successfully defeated the ruling Spanish, albeit with outside help, and declared independence in 1581 (later recognised by the Spanish in 1648). And, once again, the residents on the land by the Nieuwe Merwede river would be freed from the clutches of empire by a foreign army in 1813. Local legend speaks of nomadic warriors on horseback with Slavonic accents and baggy trousers defeating the French forces in Werkednam in December of that year. 122 years later, local Football club Steeds Voorwaarts Werkendam wanting to change their name so as to not be confused with a similarly named sports union took inspiration from the Cossack liberation of their land from the Napoleonic Forces. From thenceforth, the club has been known as “Kozakken Boys”. 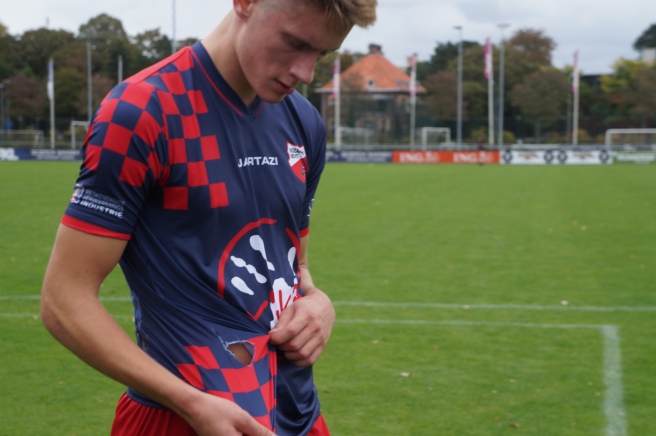 Investing oneself personally into a sports fixture often allows you to get a heck of a lot more out of it. However, the contrary is often true as well. Our flippant, hungover decision to check out Koninklijke HFC’s home fixture against the travelling Kozakken Boys was well rewarded with a cosy atmosphere, a charming and well-staffed clubhouse, moderately priced and satisfyingly greasy food, cold beer on draught and a genuinely exciting sporting contest between two teams of capable semi-professional Footballers.

It was the Kozakken Boys who opened the scoring in comfortable style. Indeed, they very much set the tone for a racy, fast-paced affair in the first ten minutes. However, the home side would eventually triumph over their nomadic guests. The 3-2 scoreline is every bit indicative of how exciting the encounter was. If only the two of us pissheads could remember more of what actually happened on pitch.