Local resentment for Cádiz fans can be seen across the whole of Jerez de la Frontera. Spray tags, fan stickers and other visible manifestations of dislike of their rivals to the South are abundant, wherever you turn. Yet in Cádiz itself, a keen-eye struggles to find any evidence of this hatred being reciprocated, or even mutual.

What I did find however was a crudely painted insult spayed on the outside of Cádiz’s primary sporting facility, the Estadio Ramón de Carranza. It is highly unlikely that cadistas would spray the words “Puta Cadiz” on the walls of their stadium. The most likely answer is that a nocturnal visitor from another rival town had the audacity to spray such a slogan right in the face of the Cádiz CF fans. Otherwise, there is surprisingly scant evidence of the sporting rivalry that exists between Cádiz CF and Xerez Deportivo FC, at least when compared to the abundance of anti-Cádiz mantra back in Jerez de la Frontera.

Why is the Cádiz-Xerez rivalry so one-sided? Why do the jerezanos hate cadistas far more than the cadistas hate jerezanos? 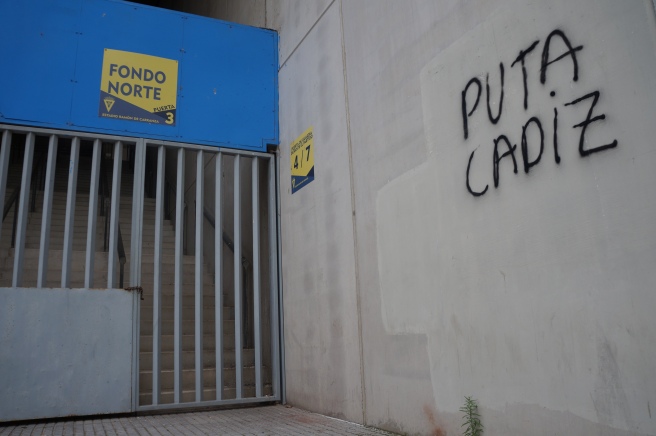 One of the reason’s why we at From Boothferry To Germany find Spanish Football culture so exciting to study is the polarised nature of contemporary Spanish politics. The ideological orgy of destruction that was the Spanish Civil War developed pockets of deep-seated left-wing and right-wing sentiment across the country. Communities and cities often next door to one another became synonymous with the ideologies that their citizens fought for; a predominantly Republican town could be a stone’s through away from a city where the Falange enjoyed popular support. Then as the country became a one-party totalitarian state under General Franco, public political discourse effectively ended (excluding of course political rebellion spurned on by cultural distinction in the Basque Region and Catalonia), meaning that the strong political affiliations within specific communities could not be addressed. Now, post transition to democracy in 1975, these unresolved city-wide sympathies for the left and right are resurfacing, often in the medium of Football.

While this may be an oversimplified narrative, it does handily explain why certain Spanish Football clubs can have such strong associations with left or right that appear entirely arbitrary on the surface. Political connections of certain clubs have led to intense cross-country rivalries; Club Atlético de Madrid, the club that had strong links to the national air force under Franco, share a wild rivalry with Deportivo La Coruña, possibly the furthest left of all of Spain’s Big Clubs. With this understanding in mind, one could possibly assume that the Jerez disdain for Cádiz has its roots in opposing ideology.

Wrong. Fans of Cádiz CF and Xerez Deportivo CF are both known domestically for being leftist, demonstrating against racism, sexism and inequality on their terraces. Indeed, the Kolectivo Sur, the leading Ultra group of the club, shares an alliance with both Biris Norte of Sevilla FC and Riazor Blues of Deportivo La Coruña, the collective names for the respective clubs’ leftist Ultras.

If the Jerez rivalry with Cádiz does not spawn from opposing political agendas, where does it come from? Two minutes walk from the Jerez de la Frontera train station, a single sticker lies just above my head on a traffic light system. The outline of an imaginary administrative county is set onto a blue background, similar in colour to the Xerez Deportivo FC kit. The design is decorated with the words “Jerez no es Cádiz”. And this is the crux of the issue.

Cádiz is one of the continent’s oldest cities, with archaeological evidence of Phoenician, Roman, Visigoth and Moorish settlement. Yet in modern times, Jerez has emerged as a large and economically powerful city thanks to its globally popular Sherry industry and status as home of Flamenco, one of the West’s remaining great subcultures. Their city looks and feels different, and the fact that a drink as popular as Sherry can only be manufactured inside the city and its neighbouring towns means that the city will always have a powerful industry of its own. Jerez does not rely on Cádiz, yet its citizens remain subject to the decisions that officials and council members sat behind their desks in Cádiz take. Thanks to its historical legacy, Cádiz remains the region’s administrative capital. The jerezano dissatisfaction with the situation results in a Football derby that is predominantly more important to fans of Xerez Deportivo FC than to supporters of Cádiz CF.

Cadistas expect animosity directed at them from their neighbours up the road, and matches against teams from Jerez de la Frontera have certainly become derbies for Cádiz CF. However, as one of Spain’s most proactive “left-wing” fan bases, Cádiz CF contests derbies with far more high-profile clubs. During a trip to La Rosaleda a week later, members of Málaga CF’s banned Ultra group the “Frente Bokeron” marched in corteo toward the ground shouting “¡Puta Cádiz! ¡Puta Cádiz!”.

Nothing is more maddening than when your worst enemy doesn’t hate you as much as you hate him.

11 thoughts on “All Cadistas Are Bastards”