To us, Jakmania refers to the vitriol we felt when Leicester City bought Eldin Jakupovic, the world’s most enthusiastic goalkeeper, from us in the transfer window this summer just gone. To everybody else, Jakmania is the name of the fangroup of Persija Jakarta, the Football team of Indonesia’s capital.

Kalapa / Jayakarta / Batavia / Jakarta, whatever you want to call the port city located on the North Coast of West Java, is steeped in history and has been populated for a long time. The population of the greater Jakarta metropolis currently stands at around 28 million people, roughly the population of Yemen, making it the world’s second largest conglomeration behind Tokyo. Jakarta however doesn’t boast a huge magnitude of different teams, like London for example. Apart from a couple of smaller clubs in outlying areas, the residents of Jakarta all follow Persija. Needless to say therefore that their following and attendances are huge. 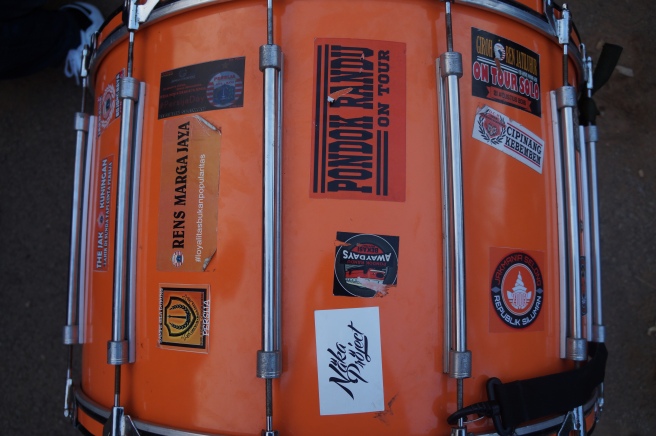 If you are already familiar with Jakmania, it’s probably thanks to a Guardian article that used a violent confrontation between Jakmania and their archrivals “The Vikings” of Persib to draw attention to the widespread fanaticism in Indonesian Football. The article chronicles a violent clash between the two fan groups that lead to deaths, and probably shocked the outside world who were previously unaware of Indonesia’s riotous Football fan scene. The article also did wonders for the reputation of proud Indonesian Ultras and fanatics, even more so for Jakmania. Because of ongoing disputes with the PSSI, Indonesia’s governing Football body, Persija are currently playing home games in the Candrabhaga Stadion Patriot in the East side of town. I headed down to watch Persija play against Semen Padang and to get first hand experience of what Jakmania are all about. 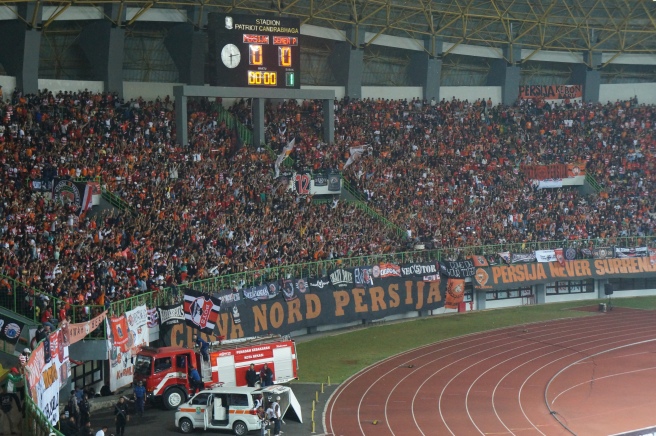 The arrival of Jakmania fans itself at the stadium is dramatic. The boys and girls who choose not to travel by stuffy train pack out tiny minivans and buses to the extent of leaning out of open doors and riding the roof. The drummers inside bash away while the entire wagon bounces and chants along, creating a stunning sight as they fly past you, weaving in and out of the horrendous Jakarta traffic. It makes a European jealous, because we just could not get away with this in our cities. Jakmania also leave the stadium in identical fashion, cramming themselves in and keeping the party (and the singing) going.

Jakmania congest the streets, alleys and pavements around the ground hours prior to kick-off. Smaller fan groups meet, swapping stickers, practicing drumming. Young lads sit around menacingly in their Saturday-best Stone Island and Adidas Originals. Vendors sell knock-off merch, fried Asian food and cold drinks. No beers though. Indonesia is after all the country with the largest Muslim population in the world. But the lads always up for some rule breaking find a way to rebel against this. A youth brandished me a bottle of some suspicious clear poison and we started to chug away. The slightly-sweet but compelling nutty flavour would’ve been enjoyable if it were actually cold.

The Jakmania fans have their own signature, their own “gang sign”. Fans extend their thumb and index finger on their hands while tucking the remaining fingers into their palm, tilting their hand slightly. This creates a rough “J”, obviously representing Jakarta and Jakmania. This is done very frequently when meeting either of their own fans or from those from other clubs. Merchandise and stickers are printed with this J on them, which emphasizes how widespread this symbol is among Jakmania. 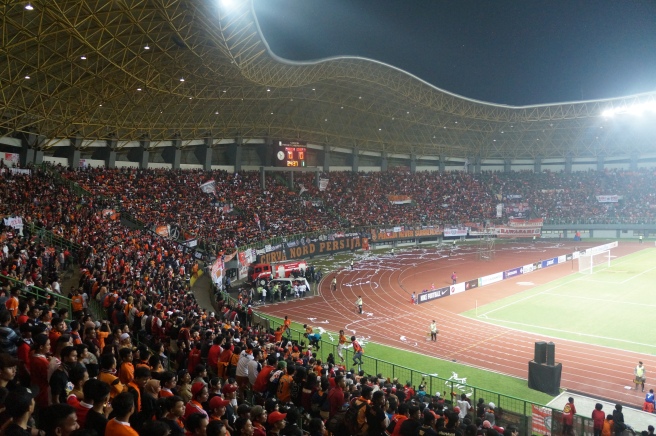 Upon entering the stadium, pockets, rucksacks, plastic bags and bodies are all searched. Indonesia is a country in which you definitely do not want to be discovered carrying dodgy articles (do your research), and the security do their bit to make sure weaponry, pyrotechnics, liquids and “other” are not brought into the ground. The posters attached to the fences every 20 metres are a constant reminder to obey the strict rules here, and the extensive security search is a strong deterrent. There was no pyro use during the game, so perhaps this approach to crowd management works. Then again, this was my first time seeing Jakmania in action. There was one fight among home fans within Curva Nord during the match and at least one other scuffle outside the stadium after the final whistle, but nothing else.

The atmosphere inside was something to behold. The stadium was full; the sold-out “Ekonomi” stands obligated my purchase of a VIP ticket. Not the usual FBTG choice but it did facilitate some good photography. Curva Nord is where the principal Ultras position themselves, but all around the stadium groups with drums and capos are stationed to build the atmosphere in their small pocket of the ground. During the game, the sound of chanting and drumming from all directions is actually more reminiscent of a carnaval then a Football match. The fact that all fans sing instead of just one section is encouraging, but the impressiveness of Curva Nord is diminished slightly. However, on several occasions the entire bowl of orange sings in unison. In these moments, Jakmania really do become one of the “Have To See” fangroups. British fans will sing in unison, but only when the feeling and mood are right. Germans sing throughout the game, but in only one sector of the stadium. Poles chant together in a very inclusive manner, but they don’t always get the numbers. At Persija games, 50,000 fans spur their team on with every breath of their lungs. Mind-numbing. 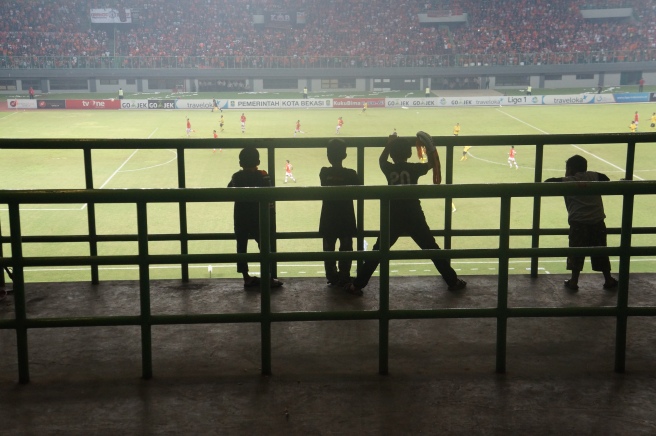 As with Malaysia, the chanting is organised and choreographed. Several capos will work together to instruct drummers and fans, while the fans correspond by singing the songs they know inside out and bouncing, clapping or waving to provide an added visual element to the atmosphere. It puzzles me why specifically in England fans haven’t taken the visual element of fan behaviour on board to the same extent that fans elsewhere have. When fans chant in unison, the purpose is to intimidate opposition players and fans and to encourage their own players by creating a wall of aggressive noise. Creating a wall of repetitive motion, such as rhythmic swaying, bouncing or clapping, is also an impressive and scary sight for the opposition. But terraces in England haven’t internalised the same “visual” aspect of fan culture. 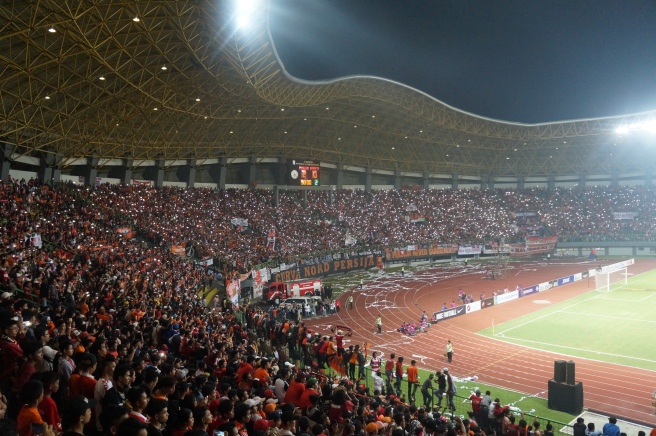 Persija won 2-0, a scoreline that flatters (both goals coming in the second half). Jakmania closed the proceedings with a fan custom seen elsewhere in Asia, but not to this extent. As the 90th minute drew closer, individuals all around the Stadion Patriot took out their phones and stuck the flashlight on before pointing it at the pitch. The result is thousands of blinking lights among the turbulent sea of orange and black, a very striking display. We all know the Asian stereotype of shy young people who spend all their time looking at their screens…. but perhaps the ubiquity of smartphones in Asia has contributed to fans using them to add an extra something to Football atmospheres. A rare piece of creativity in a continent that usually promotes conformity. Whatever the origin, we have seen it being performed from Beijing to Jakarta, and it is good to see fans taking inspiration from within Asia, rather than always copying Europeans.