Even before we discuss Football, Yogyakarta ticks all the boxes for visitors.

She sits comfortably in the centre of Java, the most populous island on Earth, pinned down by a handful of stroppy volcanoes that cause seismologists to twitch from time to time. Volcanic land is very fertile and the slopes that surround Yogya are no exception. The land easily supports a large population and the region is abundant with stunning scenery, lush forests and unforgettable landscapes. Yogyakarta has therefore been a kind home to civilisations for millennia.

Records are not always reliable, but there is one historical kingdom native to Yogyakarta about whom we know a fair bit. Dating from the 1400s to the late 1600s, the Mataram Sultanate takes its name from those fertile slopes surrounding the Gunung Merapi volcano. At its peak, the Mataram Sultanate dominated Central Java and made Yogyakarta its capital during the first half of its existence. The capital changed location several times and eventually became neighbouring Surakarta, lighting the spark of the ceaseless rivalry between Yogyakarta and Surakarta, to which we will return. But the Mataram built a lot of extraordinary architecture in and around Yogyakarta surviving to this day that provides another strong incentive to visit.

Yogya’s famous universities take in and churn out a high number of students, who in turn contribute to the culture of the city. Large volumes of students means affordable and abundant nightlife, completing an outstanding tourist destination. And for the beach bum types, Yogya sits a short distance from the Javanese Coast. Yogyakarta is so unfairly endowed with assets that collectively contribute to a high quality of life.

And if that wasn’t enough, the Football fan scene in Yogyakarta is established, thriving, complicated and wondrous. There are effectively three clubs in the city, all contributing to an eclectic fan scene.

Founded in 1929, PSIM is one of Indonesia’s oldest Football clubs, something that fans take great pride in and use to justify the legitimacy of their support. As far as they are concerned, there is only one team in Yogyakarta. The collectively name for PSIM fans is Mataram as they see themselves as true descendants of Yogyakarta’s former Sultanate. They use this moniker to associate with the Sultanate’s ancestral dominance and brutal ruling style over the rest of Central Java in order to project an image of toughness and independence as contemporary Football fans. PSIM Yogyakarta fans are not unknown for violence and hooliganism, and their Away Day exploits are legendary across Java.

Their home stadium is the Mandala Krida Stadium, eastward of Yogyakarta’s city centre but still relatively central. Although PSS Sleman have previously played home fixtures at the Mandala Krida, it is the infamous home of the PSIM Loyal and one of the truly daunting grounds for any Indonesian visiting player on match day. The entire area within the Yogya ringroad is Mataram territory as identified by countless graffiti, and the Mandala Krida is the unquestionable heart of that territory. PSIM Yogyakarta currently play their Liga 2 home fixtures at this impressive stadium.

The image of PSS Sleman fans is very different.

Sleman is an administrative town in its own right and not an actual part of Yogyakarta, but economic growth has resulted in the two joining together to effectively form a single metropolitan area. Fans from Sleman and the area North of the Yogya ringroad are not expected to follow PSIM. The quirky but impressive Stadion Maguwoharjo tucked away in swampy grassland Northeast of Yogyakarta plays host to some of the most impressive choreos and atmospheres seen on the planet, courtesy of the legions of PSS Sleman fanatics.

Brigata Curva Sud is the most influential and well known fan group of PSS Sleman, but Slemania occupies the position of the older and arguably more traditional Ultra group. In 2011 a small group of PSS Sleman fans decided to break away from Slemania to form their own organisation focusing more on creativity and dialogue between fan groups, with the goal of reducing the frequency of violent confrontations between Indonesian Football fans. BCS are proactive in their politics, having established stronger relationships with eternal rivals Persis Solo of Surakarta, which on a larger scale has helped demonstrate that Indonesian fans can be passionate without the need for violence.

Nowadays, BCS are the ones laughing hardest. In spite of a long struggle, their message, attitude and culture have become synonymous with PSS Sleman. Their brand is now so strong, they take revenue from their merchandise sales and use it to actually sponsor their club; an incredible feat. But PSS Sleman are also getting rather accustomed to Football purgatory in Liga 2.

Bantul sits to the South of Yogyakarta, a small suburb with little notable industry. The club Persiba Bantul, although also being relatively old, in modern times is surrounded by alleged controversy and financial scandal leading up to the chairman’s office (which we won’t detail here for legal reasons). In spite of having played in the Indonesia Liga 1 on occasion, Persiba Bantul currently play in the Indonesian 3rd tier and don’t seem likely to climb back up the domestic Football ladder any time soon. As such, fans have become disenfranchised with the club in current times, many of which are abandoning Persiba Bantul to follow PSIM Yogyakarta, as the two clubs’ fans have always been very amicable to one another.

The three clubs of Yogyakarta have very different identities but all share two common characteristics. The first is a streak of stubborn pride in their hometown. Other cities such as Jakarta, Surabaya and Palembang lack Yogyakarta’s enviable quality of life and points of interest. Fans like to celebrate Yogya’s objective charm and beauty in the faces of their rivals. It is the equivalent of the “Back to your shithole” attitude. But this pride is further bolstered by Yogya’s consistent political importance within Indonesia. The region (also known as Yogyakarta) is the only one in Java that maintains its regional monarchy, and the region’s key role in the fight for Indonesian independence was rewarded with a “Special Administrative Status”. What this actually means is complicated, obscure and boring. To the Football fans, all that matters is that this status further demonstrates Yogyakarta’s greatness. 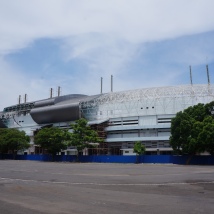 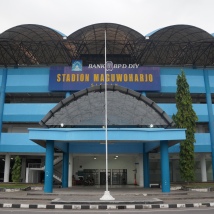 The second shared characteristic is the rivalry with Persis Solo. Persis Solo are the single professional club of Surakarta “Solo”, the city a couple hours up the road. As previously mentioned, the rivalry between the two cities and their citizens began during the reign of the Mataram Sultanate as the seat of administrative power switched locations. Through the following years, the ruling elite of each city failed to cooperate. Eventually Surakarta was sacked by the Dutch and their plea for help was ignored by the Yogyakartan Monarchy. Nowadays Surakarta “Solo” is back on its feet but is considered by many to be a safehouse for radical Islamism within Indonesia. Indeed Surakarta “Solo” has seen some of the worst race-riots in modern Indonesian history. Yogyakartans see Surakartans as untrustworthy aggressors. Surakartans see Yogyakartans as up-themselves types in need of a comeuppance. The whole thing results in aggression and violence when Football fans of the respective cities meet.

The city and region of Yogyakarta host much natural and man-made beauty and are abundant in a rich culture so woefully unknown abroad. Yogyakarta definitely deserves to be on your bucket list, and the complex and exciting story of the city’s Football scene tops off what is already one hell of a city.

2 thoughts on “Football in Yogyakarta”