PSIM Yogyakarta currently play in the Indonesian Liga 2, just missing promotion this season. Their home colours are a very attractive combination of a cobalt blue, white and black that can be seen throughout the handsome city of Yogyakarta. Founded in 1929, PSIM is one of Indonesia’s oldest Football clubs and institutions, something that fans take great pride in and use to justify the legitimacy of their support compared to cross-town neighbours PSS Sleman and Persiba Bantul. 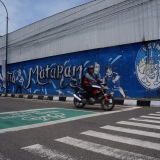 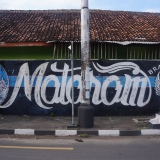 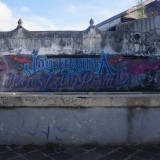 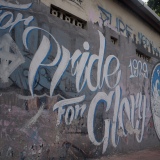 In all honesty, “cross-town rivals” is a bit of a missnomer for describing the relationship between PSS Sleman, Persiba Bantul and PSIM Yogyakarta. As far as the PSIM fans are concerned, there is only one team in Yogyakarta. There is objective reason behind this claim. Sleman itself is an administrative town in its own right. Economic growth has resulted in the two joining together to effectively form a single metropolitan area over the years as the open land between Sleman and Yogyakarta has been progressively built upon. However, in the eyes of Football fans, Sleman is in no way a neighbourhood of Kota Yogyakarta. Football enthusiasts from Sleman are not expected to follow PSIM. And Persiba Bantul? The founder and chairmain was a former big-cheese inside the PSIM management who wanted to develop Football’s presence in the area immediately south of Yogyakarta. Persiba Bantul however continue to suffer from scandal, low attendances and poor on-pitch performance, and as such have little following in the area. PSIM fans do not consider Persiba Bantul a rival club. 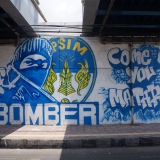 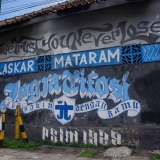 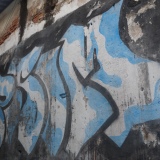 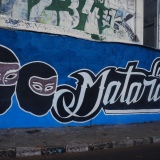 PSIM fans are collectively known as “Mataram”. This name refers to the fertile sloping plains that surround Mount Merapi, the stroppy volcano (making geologists twitch from time to time) overlooking Yogyakarta. But Mataram was also the name of the last surviving Indonesian Sultanate prior to Dutch colonisation of the islands. The Mataram Sultanate lasted from the 1500s to the end of the 18th century and managed to conquer an impressive area of land, spanning Central Java coast to coast. The capital changed locations on various occasions but the city we now call Yogyakarta has been an important site for the Mataram Sultanate throughout its existence. The ruling style of various Mataram leaders was also famously brutal and tough (characteristics that PSIM fanatics and hooligans like to associate with). The Dutch did assume administrative control over the region, but with far less damaging impact compared to other parts of Indonesia. The Mataram Sultanate maintained (limited) power while other parts of Indonesia were taken over completely. 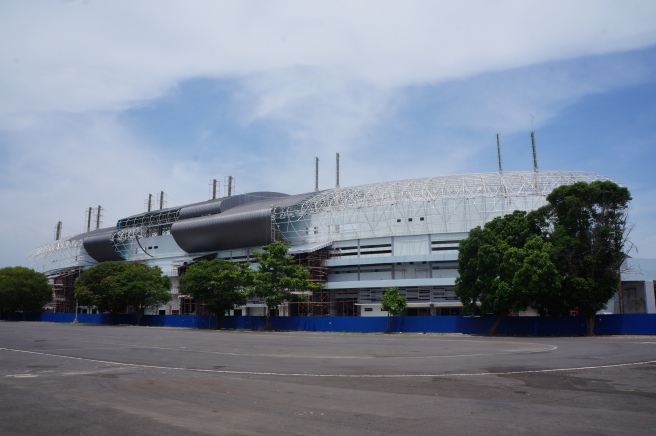 Fastforward a little and during the Indonesian independence movement of the 1940s, Yogyakarta’s importance grew to a national level. It briefly became the Indonesian capital after the Japanese were ousted, and then the Sultan of Yogyakarta pleged allegiance to Sukarno (the future Indonesian President) as the independence movement rallied to fight the Dutch as the Dutch tried to assume their occupation of Indonesia post WWII. Independence was won and the Yogyakarta Sultanate was awarded the privileged status of “Special Region” within Java because of its pivotal role in the fight for independence. It is important to remember that Yogyakarta is the name of the region as well as the city and it is the only Indonesian region to this date that maintains its own monarchy. This point is of huge importance to the people of Yogyakarta; it is the cornerstone of their identity as a unique political power with significant cultural importance within Java and Indonesia. 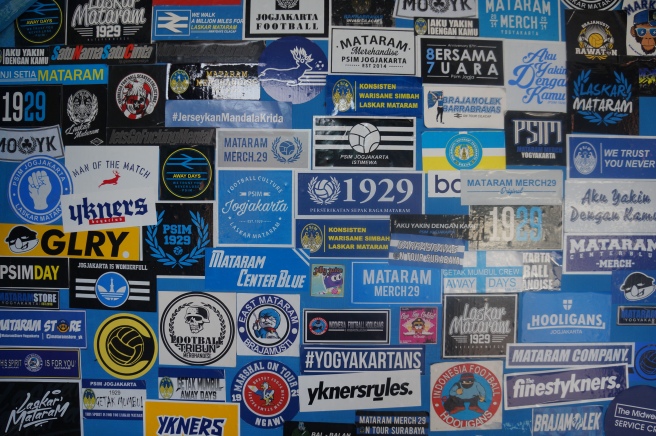 This feeds a tough vein of stubborn pride in the character of the average Yogyakartan. And as the majority of Football fans in Kota Yogyakarta are supporters of PSIM, it makes sense that PSIM fans identify with and name themselves after the royal tradition their city has compared to other regions and cities in Java and Indonesia. This is the reason why the PSIM fans call themselves “Mataram”. In addition to a proud history, Yogyakarta enjoys a remarkably high standard of living. With its elegant, low architecture, cool sea breeze and sloping, tropical foothills, Yogyakarta feels a lot different to for example agitated, dirty, desperate, migrant-magnet Jakarta. The combination of grand history and high quality of life provide little incentive for Yogyakartans to leave. Where would they go that would be better? They have a deep love affair for their own city. 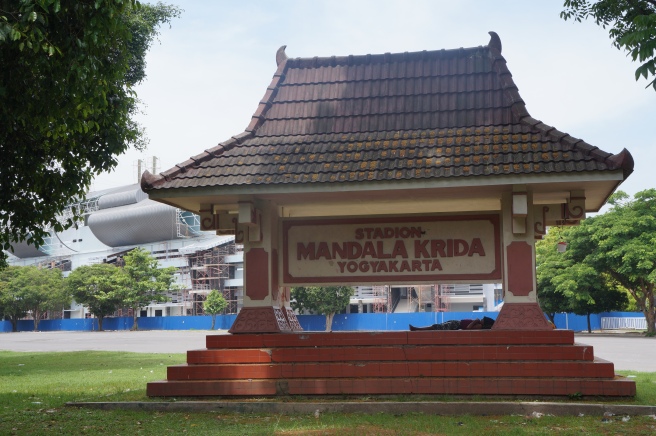 This picturesque lifestyle however is undermined by unemployment, corruption and poor education for the majority. In spite of Yogyakarta’s reputation as a good place for higher education at its campuses, a lot of the young here have little in the way of employment opportunity (the Yogyakartan reluctance to go live elsewhere of course does not help). Throughout the world, disenfranchised young men who find little purpose inside an economic system that does little to promote people on the basis of merit will be predisposed toward gang culture and crime. Add the ingredients of regional pride and strong Football heritage of Yogyakarta and this combination quickly leads to hooliganism and fighting. 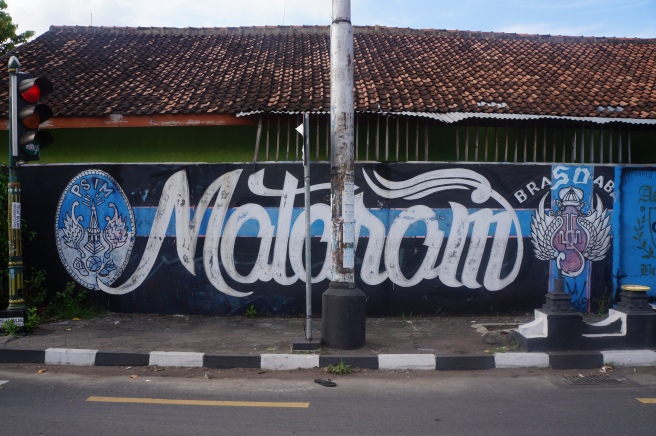 1997 was the year when the former dictator Suharto died. Indonesia swung toward democracy. Importantly, the press opened up at this time and Football fans were suddenly more exposed to fan behaviour and customs from around the world. Indonesian fans and in particular Mataram were quick to take inspiration from the English fan scene, imitating the Casual look and forming organisations resembling firms. 20 years later and all of this is still recognisable; the PSIM fans that I took time to speak to not only glorify the hooligan reputation that their fellow fans have. They openly admit that they don’t really want their way of life to change or disappear. 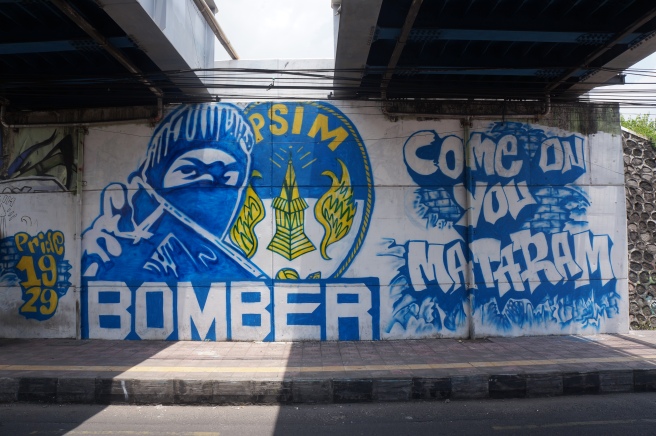 Indeed the violent tendencies of Mataram and the various other fan groups of PSIM Yogyakarta show no signs of going away. Their biggest rivalries continue to be against Persis Solo (the team of Surakarta “Solo”- the city with a centuries old grudge against Yogyakarta and its monarchy) and PSS Sleman. Clashes between fans are violent and bloody, with deaths all too frequent. Kota Yogyakarta’s calm and romantic nature is not reflected in the behaviour of many PSIM Yogyakarta fans.

As one fan I spoke to put it, Yogyakarta has had the right mix of qualities to create an “embryo of hooliganism” within Java. PSIM Yogyakarta, being the undisputed club of the citizens of Yogyakarta city, is the natural vehicle for self-proclaimed sons of the Mataram Sultans who use Football to express both pride in a hometown of jaw-dropping beauty and frustration at a lack of employment opportunity.

7 thoughts on “Mataram of PSIM Yogyakarta”