Ever heard of home fans travelling 400 miles one way to play their derby?

Persija of Jakarta versus Persib of Bandung is arguably Liga 1’s and Indonesia’s biggest grudge match, even though others would disagree. Meetings between the two are known for violence and the game played on the 3rd of November was relocated to the city of Surakarta, known as Solo, 600km from Jakarta. Who made this decision exactly, I never quite found out. But the Jakmania fans of Persija had to purchase tickets in Jakarta and then travel across Java. Even though Bandung is geographically closer to Solo, Persib fans “The Vikings” were not present in big numbers at the match, as it was officially a Persija home fixture. I heard stories of mild clashes and vandalism on the way to the match, but saw nothing first hand.

No surprise; all tickets were sold out. Credit to Jakmania. Twice in a row I had to simply arrive at a sold-out Persija game and ask around. A middle-aged gentleman came to my rescue for around $6 and the fun began. Entering the East Stand of the Stadion Manahan, a tidal wave of young boys crushed together to force their way in. Chanting all the while, the heat of so many perspiring bodies caused at least 1 to pass out. Jakmania fans climbed over railings and worked to get flag poles past security who struggled to get into the crowd and pick out the banned articles. The heavens opened in typical Asian Monsoon style. Heads and shoulders became soaked, but feet remained dry as we were so tightly packed together, the rain couldn’t reach our feet. 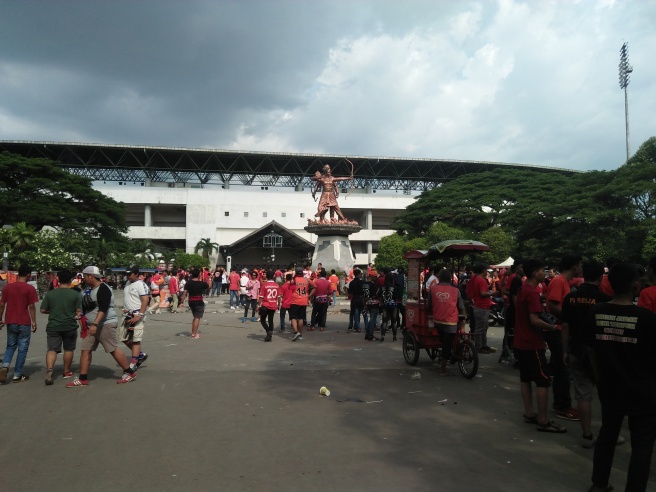 As kick-off of the season’s biggest game approached, the impatient fans continued to barge forward. An impossible task for stewards, I breached security and got no body search. Bringing in pyro would have been easy, as we were to see soon after. We just ran forward splashing our way toward the gates, clambering over more fencing and ignoring instructions wailed to us by the security staff, helping each other get toward shelter as quickly as possible. But that shelter was short lived out on the open terrace. The first half was nothing short of a 45 minute shower. 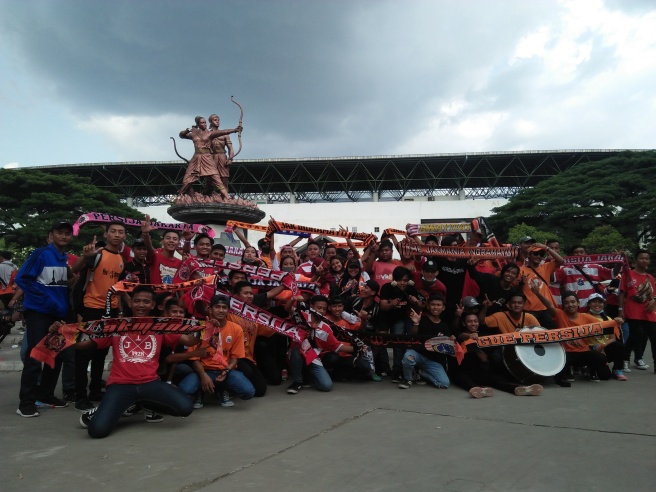 The fans were ready for the occasion. Every Persib player on the ball close to our tribune was greeted with assorted projectiles. Drinks, bottles, toilet roles, stones, shoes. The Persija players repeatedly begged the Jakmania fans to persist in throwing large objects toward the pitch. The sea of orange was not there to be lectured to. Persib scored a clear goal from a right side cross headed in, but it was ruled out. The goalscorer was in hysterics, but the Persija players played on, and the Jakmania fans jeered on. A poor decision, or a deliberate one? Whatever, the physical aggression displayed by players of both teams certainly met the derby hype, unfortunately so did the diving. 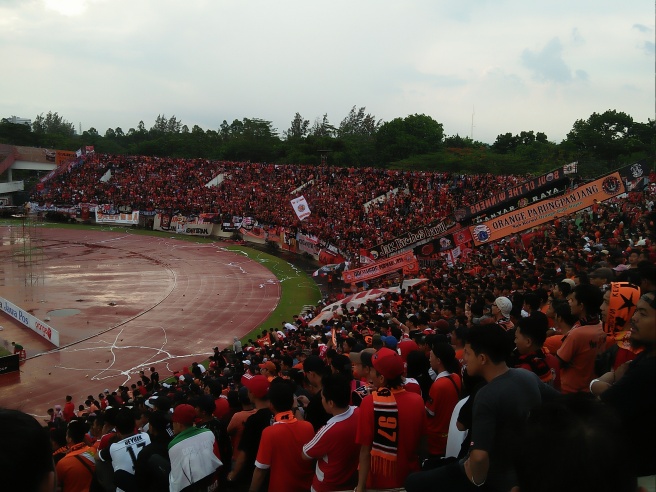 The first half came and went in the blink of an eye. The miserable weather slowly took its toll on the Jakmania fans who began to quieten. But the skies brightened up in the second half and the fans bounced back, 3 quarters of the bowl chanting, swaying and waving in unison. Impressive, intimidating, magnificent. A late penalty was awarded to Persija and the spot-kick thumped home, the dumb penalty-area body-check cost Persib Bandung the biggest game of the year. But it was a late sending off for another Persib player after receiving a second yellow that caused the biggest protest. Persib players and manager rushed the referee and seethed in anger, before forfeiting the game.

It was the players’ reaction to winning the derby that was the most dramatic; they ran to each other, embracing teammates one by one and tearing across the field to celebrate with the Persija fans. Their delirium was tangible. Fans continued to sing and chant, and around us, flares began to burn while some of the hardcore jumped onto the pitch and mobbed their heroes. Stewards and riot police did little to stop the onslaught, but it fell short of a full-scale pitch invasion.

My one key observation of the day is a cynical one. Two institutions left their mark on this match: the refereeing and the police. The Persib goal was clear, making the decision against it a suspicious one, even more so when Persija were dutifully awarded a spot-kick late in the game after they had failed to convert (though it did look a fair decision). There is one universal that many Javanese fans I have spoken to have commented on: corruption. But I remain belligerent in my conviction that the game was fairly arbitrated….

Secondly, the police and security behaviour during the game was interesting. For a derby, the police presence outside the ground was surprisingly low. They only made one intervention. A fight broke out among Jakmania fans in the North tribune, lasting around 5 minutes, obligating a response from security. Riot police chose not to enter the tribune via the gates and work their way to the center, but to collectively climb into the stand from below to retrieve culprits (I saw at least 1 arrest). Watching from our stand, the scene looked like frenzied, simple ants, desperately crawling up a ledge to get to the drop of honey. I imagine that they too were the targets of projectiles as they tried to intrude into the block. It was pure suicide, somehow no officers seemed to get injured. It was astounding, but compelling, to watch.

We all love a derby.

9 thoughts on “Persija vs Persib”