Seen inside the KCOM Stadium in Hull, a rather conspicuous location for such an Aufkleber. 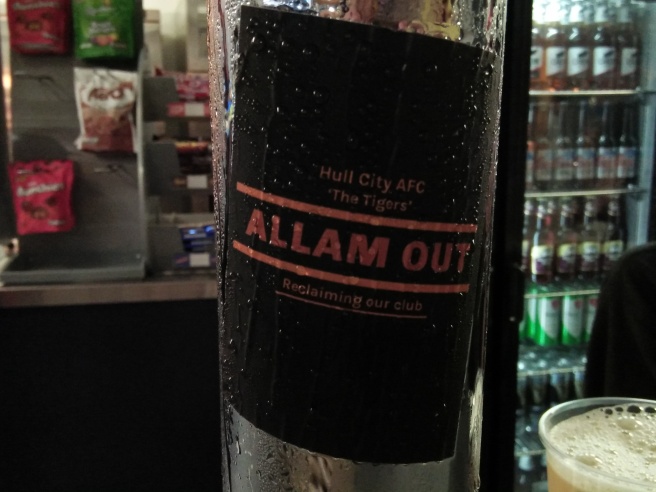 The Allam family continue to own Hull City and manage all club operations as a large congregation of fans continue to protest against that very ownership. Dr Assem Allam’s purchase of Hull City was completed on the 17th of December 2010, after having invested personal wealth to pay outstanding debts and taxes owed by the previous club management. The signing of Steve Bruce as head coach in June 2012 showed a serious statement of intent, and the following season Hull City went on to achieve automatic promotion to the Premier League in dramatic fashion on the last day of the regular season, May the 4th. Hull did the unthinkable shortly afterward and not only retained Premier League status a season later, but also reached the FA Challenge Cup final in 2014, painfully and unfairly losing to that red and white London team after extra time, fam.

However, attempts by the Allam family to improve the marketability of the club via a rebrand using the name “Hull Tigers” (first announced in September 2013) have sparked considerable protest and contempt among Hull City fans and indeed the wider general Football community. The plan was seen as contrary to the correct morals of Football fan culture, which places high importance of tradition in the face of commercialism. Shortly thereafter, Dr Allam was quoted as saying in the press that protesting fans “can die when they want”, a reference to the defiant fan chant “City Till I Die”. The very visible protests by fans against these actions during games caught the attention of the Football Association, who consequently rejected the change of the club’s playing name in April 2014. Dr Allam shortly put the club up for sale, but, over 4 years later, the Assam family still own the club and manage all operations.

Since Hull City’s very successful 2013/14 season, the club has yoyo-ed constantly, enduring 2 relegations, 1 promotion and the departure of no less than 4 different managers (and a heck of a lot of good players) in that time. Writing in July 2018, Hull look unlikely contenders for promotion to the Premier League any time soon. Nevertheless, it is fair to say that the recent, modest sporting success and financial stability that Hull has experienced under the Allam family is without doubt a product of their highly proficient management and care for the city. The Allam family have donated vast amounts to various local charitable causes throughout their lifetimes and have also invested in East Hull’s Rugby League side Hull KR, proof of their legitimate interest in the wellbeing of the city’s people. The narrative of a foreign owner (Dr Allam was born in Egypt but was educated in East Yorkshire) buying an English side simply for egotistical self-promotion doesn’t stand up to scrutiny in the case of Hull City and the Allam family. However, protests against their ownership, such as the one above, continue, and fans highlight negative conduct of the Allam family and the perceived lack of respective for traditions of Football in Hull and East Yorkshire.

We will avoid stating our personal opinion of the “Allam Era”, preferring to present an honest account of the history of the family’s involvement in the club so that you can make your own informed decision.

8 thoughts on “Ultras Aufkleber of the Week – Hull City”