It was a group of Hertha-mad friends that steered me toward the Blau-Weiße Alte Dame, and an Away Day was something of an eventuality. Down the pub you’re always chatting about terrace life, and these boys had criticism for the atmosphere at English stadia, or rather, lack of it. Naturally that was something I disputed quickly. But the story of my second Hertha BSC Away Day made me understand just what exactly they were talking about. This is that story.

On the first one I had felt like Elijah Wood. Sat on a coach with a massive bunch of lads I didn’t know, driving all the way from Berlin to Mönchengladbach, I had no idea what the Away Day rituals and customs were in Germany. That same apprehension on your first day of a job when you have no idea what is expected of you. I needn’t have worried, as the ever Football-loving Germans encourage drinking on the Football Special (difference #1 to the English Away Day), which got us talking pretty quickly. Meaning within 1 hour the lads around me were all asking questions starry-eyed about trips to The Den and Upton Park. Within 2 hours I had half the coach singing “there’s only 1 team in Yorkshire”. Proudest moment of my life. Hertha lost comprehensively and I clogged the coach toilet with vomit before passing out, but the day was a fucking blast.

So it didn’t take long for me to book round 2. Hertha BSC at Werder Bremen’s Weserstadion. Meeting point, 7am Zoologischer-Garten, but 1000 Hertha boys (only boys) would not all get on one train. We were simply too many for one train. A big scram never works and the Ultras got involved, using their “influence” to get themselves on. The conversation with one of our boys went along the lines of “you’re not in the Scene, so you can’t get on this train”. Clearly the rhetoric of Undying Brotherhood doesn’t extend beyond the Ostkurve. Bellends. A plain-clothes civi gave us a Plan B; boarding a regional train from HBF, changing at 3 different stations. It was gonna be a long day.

Dash across town. Board. Open the beers. Our passage turned out to be another crazed Saturday cross-country Bundes-banter drinking session, much as the last Away Day had been. It’s so fucking hilarious. At one point, a two-bogey train between Stendal and Uelzen (towns you have never heard of and will never visit) was so full of Hertha boys, people were sticking themselves in baggage racks and pissing 3 at a time in the bogs (please don’t ask for more details on how we managed that, it’s not a pretty tale). I fell asleep shortly before Hamburg. But it really kicked off when we got to Bremen.

The instructions were to cover your face with scarf, balaclava or neck warmer. Hoods came up in anticipation as we stepped onto the station platform to the sound of nervous chanting. “Wir sind die Hauptstädter. Asoziale Hauptstädter”. A swarm of riot police were waiting for us outside the main entrance. One by one, visiting Hertha fans were summoned forward, leaving the throng penned in the doorway, to a 25 square meter zone marked by temporary fencing for a body search, before being pushed forward onto a bus. Buses would leave once full and transport us to a walkway close to the ground to ensure we came into contact with as fewer locals as possible.

We continued along the river bank in a smaller group (another reason for breaking up the group outside the station and ferrying us in with buses), slightly less tense, before we got to a small collection of trees immediately before the stadium. To our left, a higher grassy bank lined with trees. In front, a fork, with the left leading to the away section of the Weserstadion, the right, a grass verge leading down to the river. Sat on this verge were around 25 Hertha fans who had presumably arrived ahead of us on the Football special, clearly handcuffed, with heavy-duty police close by. And facing the police, a huge group of Hertha boys were having a stand-off. 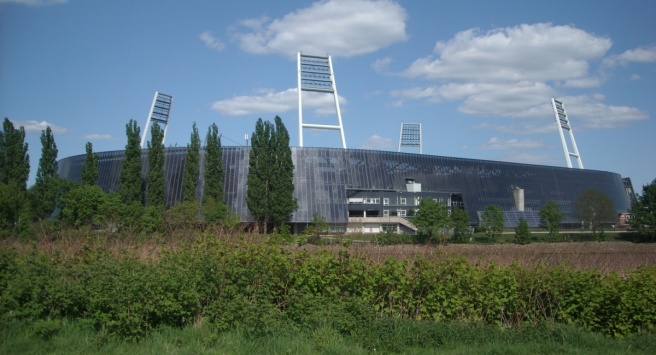 The word was that the Hertha fans had expressed disapproval of the delaying tactics used by the police on the way to the ground, by what means were never made clear to me, and the feds had arrested them. Other Hertha fans around had realised what was going on and now were ordering a protest of all joining Hertha boys to remain on the scene until the issue had been resolved, i.e., until the arrested fans were permitted to go into the stadium. The police had done the rest by calling in for more resources, placing themselves between the soon-to-be-detainees and the ever growing mass of Hertha fans, carefully ensuring the path into the stadium remained unobstructed.

Kick-off came and went. The Ultras’ instruction was not to move. Half and an hour and the Hertha following still remained together in the face of the police. There was no dialogue. We didn’t want one. There was no negotiation on terms to be had. And besides, dealing with the police is something very taboo. Circumstance did not matter. The 25 arrested fans were never to blame; it was the police. It was always the police, and it was time to show aggression. One hour passed from kick-off. The word was given and suddenly 3 more lines of fully-equipped riot police formed to hold us in a tight square. We were trapped.

The police loudspeaker continued to address our mob. Any ticket-holder wishing to go directly to the stadium would not be obstructed. A catcall of jeers served as a response. Fans could indeed pass the police, but they couldn’t return to the square containing the mob once having passed the lines of riot police. The identity-protecting clothing remained in place. Fists were kept clenched. Nerves were high. That feeling of Elijah Wood returned, unfamiliar in the situation. I had seen nothing close to this in the UK, English fans simply don’t have this level of organisation or dogma. Fans are expected to fight for one another, putting the club and all your Brothers in Colours ahead of your own fears. A battle with the police is worth subsequent penalty, and anyone who favours a clean police-record can never call themselves a true fan of the team. This is the dogma. 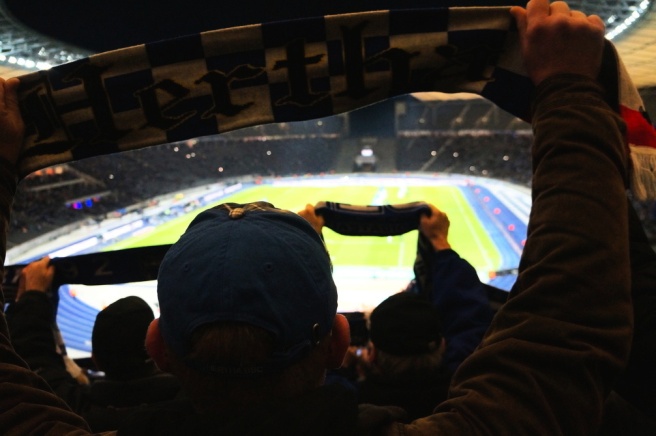 The resolution was unclear to me; I don’t know if the 25 men were freed. But with around 20 minutes of the game remaining, the mob ran to the turnstiles and crammed in, with no interception from the rozzers. The Ultras stopped us in the gangways to the terraces, waiting until every remaining Hertha fan was together, before striking up a chant as we entered the ground. Onlookers in the home sections must’ve been bewildered at our late arrival. Or maybe they had their suspicions about what the hold-up would’ve been. Hertha lost the game 2-0.

On the long station-hopping journey home we had heard reports that Hansa Rostock fans had attacked Hertha boys on a train ahead of us. At around 11pm we waited anxiously at Magdeburg train station, a group of around 50, for 40 minutes to board the final train home. Magdeburg Hauptbahnhof is reputed to be a dangerous place for a travelling Hertha fan, being one you pretty much have to pass through every Away Day. I don’t know how true the stories of supporters being picked off one-by-one by 1. FC Magdeburg Ultras are. “A day to forget” sighed one of our group as we pulled back into Berlin HBF. I completely disagree.

8 thoughts on “Atemlos; Hertha Away at Bremen”