Considered Israel’s leftist team and one that is very popular among Israeli Arabs. But you still gotta question the eligibility of Israeli teams to compete in European competition…. #justsayin.

Ladies and Gentlemen, the Ultras Hapoel of Hapoel Tel-Aviv. 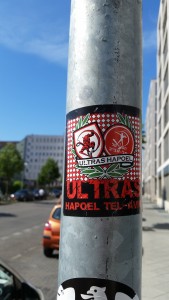 We’re hoping to get to a game out there one day. If you’re a Hapoel fan, help us make it happen and we’ll feature you!

One thought on “Ultras Aufkleber of the Week – Hapoel Tel-Aviv”