The ethnic Han account for approximately 92% of the population of the People’s Republic of China. A couple hundred other ethnic groups are formally recognised by the Chinese Communist Party (CCP), though possibly thousands more exist unofficially within the world’s most populous country. In his book “The Emperor Far Away”, author David Eimer literally and figuratively explores four geographic regions of China where the Han Chinese are outnumbered by their reluctant compatriots, and his work directly inspired this article.

The picture he paints is bleak. While the Han do not culturally dominate Xinjiang, Tibet, Yunnan and the Dongbei region of Northeast China, the CCP pursues policies that inevitably have the consequence of prioritising and benefiting welfare of the Han even in the provinces and prefectures where they are not in the majority.

In its Orwellian mission to control its population, the CCP has curated a very specific one-size-fits-all narrative of modern Chinese history that is pushed through all available media outlets onto the general population. Media organisations that stray from or question this narrative, even unintentionally or accidentally, are quickly corrected in a manner that is often very public and very humiliating. The purpose of this has been to remove any material that questions the legitimacy of the CCP’s rule, and to dissuade against any potential dissent against its totalitarian one-party political model. Among the Han, this has largely been achieved through extensive media control, so much so that that they will not be able to read this blog post after the CCP blocks it. However, in the border regions where the Han are outnumbered by members of other ethnic groups, the CCP believes that its official line is questioned far more frequently. 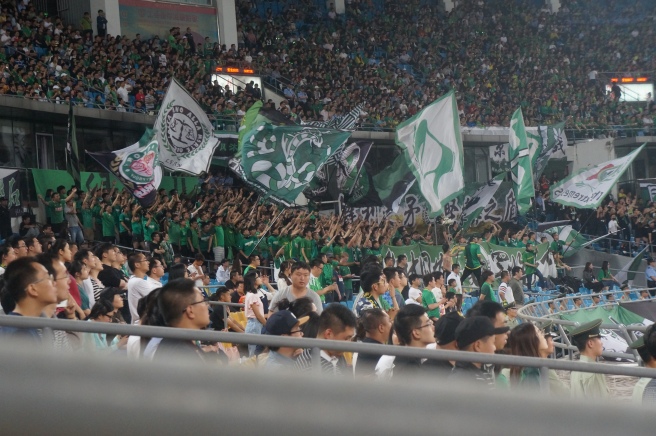 The CCP sees for example defiant Tibetan or Uighur nationalism as a potential threat to its machines of population control; an alternative narrative of Tibetan or Uighur history is enough to mark these ethnic groups out as suspect. The simple solution is to introduce additional measures; the local media is of course manipulated by the CCP, but the party also closely scrutinises and, when necessary, restricts the behaviour of members of China’s ethnic minorities who are more likely to question the party’s facade of benevolence and celestial right to govern. In the case of Tibet, investment in infrastructure is far lower than it is in “Han China“, relative police and soldier numbers are far greater and travel restrictions are incredibly strict.

The Chinese Communist Party knows that Football could be a popular platform for unsatisfied, disenchanted Uighurs of Xinjiang Province for example to manifest their discontent and launch very visible demonstrations. If Han television viewers tuned in and saw Uighur Football fans openly speaking out against the CCP with banners and chants during a televised Football match, they could begin to question what they have been told about the party, its members and its activities.

Somewhat conveniently, every single side competing in the current Chinese Super League is located in a region where the Han is the most populous ethnic group. I view that fact with some suspicion, but maybe I’m too cynical. However, there are clubs that currently compete in China’s League One (the country’s second tier of Football) located in cities where the Han are outnumbered, such as Urumqi (the largest city in Xinjiang) and Harbin (in China’s far northeast). The notion of Xinjiang Tianshan Leopard FC (in Urumqi) being used by dissatisfied Uighurs as a potential vehicle for protest directly in the face of the pacified Han Chinese who attend and watch these matches makes the CCP nervous. The party knows it cannot get away with permitting sports events inside “Han China” while forbidding them outright in Xinjiang Province, so the best solution is to selectively broadcast matches played in Urumqi, to restrict the travel of Football fans to and from Xinjiang, to pack the stadium with security personal and overindulge in surveillance equipment.

Now, I have no immediate experience of the policing and security measures undertaken by the CCP at sports events in for example Xinjiang. However, I have seen the extensive police presence and security measures employed at professional Football matches elsewhere in the country, and I believe it entirely conceivable that the CCP would go to such extraordinary lengths to prevent a humble Football club located in one of the country’s border regions from transforming into a vehicle for a regionalised ethnic nationalism that threatens the CCP’s domination of the Chinese media. Because of this, the CCP views “ethnic Football clubs” in China’s border regions with a great deal of mistrust and apprehension. Yet one Football club with explicit links to an ethnic minority has survived against the odds for over six decades in China.

Yanbian Hailanjiang FC is not a name that is likely to be familiar to Football enthusiasts in the West, but since its original creation in 1955, it has been one of the highest profile Football clubs in China. The club that has been known as Jilin FC, Yanbian FC and Yanbian Baekdu FC in its history has survived Chairman Mao’s Cultural Revolution, Deng Xiaoping’s policies of economic liberalisation and Xi Jingping’s efforts to consolidate political power, in spite of being a club whose fans intensely identify as ethnic Koreans.

Located in the southern part of the Jilin province that borders the Democratic People’s Republic of Korea (DPRK) is the “Yanbian Korean Autonomous Prefecture”; one of the least densely populated prefectures of all China. Yet in Yanji, the region’s capital city, approximately 40% of residents are ethnically Korean, a figure that was as high as 60% in the 1950’s. It is here where China’s favourite and most tolerated ethnic Football club competes, a side known for the majority of its history as Jilin FC and one that has never been criticised publicly for its blatant association with the culture of the Korean peninsula. That formerly used club-name-suffix “Baekdu” is after all a direct nod to the Korean origins of much of the club’s fan base and talent.

Yanbian Hailanjiang FC has competed in the Chinese Super League as recently as 2017, yet fans do not draw the suspicions and scrutiny of the CCP in spite of a very public association with one of China’s ethnic minorities. Why? Because the Han implicitly trust the Chinese-Koreans in a way that they do not the Uighurs of Xinjiang Province and the Tibetans.

In the CPP’s polished narrative of the country’s past, the Koreans were a group that fought admirably against the Japanese during the Sino-Japanese War and largely alongside the CCP during the Chinese Civil War. Additionally, the majority of China’s ethnic Koreans can trace their ancestry back to North Korea, a territory they are unlikely to want to emigrate to in the near future. The experience that the ethnic Koreans of Yanbian of life in North Korea gives them perspective as they know exactly how bad life can be. They therefore have much reason to be grateful for living in a modern China where food is plentiful under the CCP, whom they feel little inclination to criticise.

The CCP therefore has allowed the leading Football club of the region, now known as Yanbian Hailanjiang FC, to compete and thrive in the domestic Football leagues with little interference; a stark contrast to Football clubs located in particularly Tibet and Xinjiang.