Betterplace.org and Ashoka held an event on Sunday the 20th March to raise money for integration programmes for refugees in Germany. Germany succeeded in welcoming a large amount of refugees in 2015 but the challenge of getting them on their own feet remains a big one. The ‘Hello Festival‘ was an initiative to raise both awareness and funds for the cause, with 100% of the proceeds going to the best presented projects and concepts for more effective refugee integration. The event included a 5-a-side Football tournament with teams including migrants and refugees living in Berlin Brandenburg. I decided to check it out. 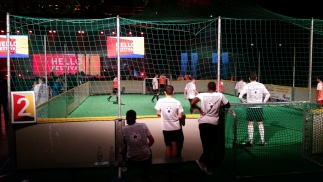 The event was held at Arena Berlin, a large multi-purpose indoor venue on the banks of the Spree. Besides the 5-a-side competition, the event featured a world street-food market, a series of djs playing on stage, various smaller activities and games for children and a bar. We arrived in time to see the competition hotting up with the run up to the

semis and final, with friends and family of the competitors really contributing to the lively atmosphere. A large tribune with seats facing in both directions separated the 4 courts, all with top-quality astroturf and netting to keep the game flowing.

The quality of the sport was pretty good, but irrelevant. The event was a success with a large number of participants enjoying themselves and a great amount of donations made to the fantastic cause. It’s easy to forget that migration has played a big part in Football history with large migrant populations in 19th century industrial cities being the first to congregate in huge numbers to enjoy the sport. Moreover, the Hello Festival was a wonderful reminder of the power of sport and Football to bring people together and to give people cause in the face of real adversity in life. All in all, a great event and a great initiative.

One thought on “Hello Festival Berlin”