British football fans have long since marvelled at the atmosphere created by fans in other countries, with flares and flags, synchronised bouncing or arm gestures from thousands of people in unison, scarves raised as each member of the spectacle screams the club anthem in delirium. But the same British fans who like 100 pictures of the ‘Yellow Wall’ in all its glory on Facebook are always very dismissive and cynical of any attempt from their own fans to recreate such epic gestures of support; “that’s not how we do it”. Because of this cynicism, progression is not made, and the support remains the same.

Well I got news for you.

Many groups of fans from the bigger clubs across the Football League are figuring out how to do it and are taking tentative first steps at creating choreos that span entire stands. And judging by many reactions across the media, the efforts made by these early-movers have been hugely popular. Palace’s Holmesdale Fanatics are widely celebrated, but Boro, Watford and Leicester have all been making just as impressive displays in recent seasons. Take a look for yourself. 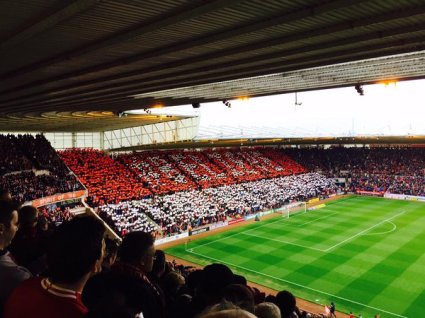 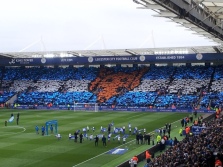 These choreos require dedication, commitment and organisation; three things which define good football support. The element of competition also introduces the need for creativity. These choreos from football fans therefore should be encouraged by all means and will only be seen increasingly more frequently across the footballing landscape in England. Indeed, many smaller teams such as York and Oxford are well underway.

In my opinion, the people who oppose it so much and laugh about attempts to introduce something new to their stand are doing so for one reason; they know that their supporters do not have a history of doing tifos, using a drum, waving giant unique flags etc, and changing their ways would mean admitting that their support has been inferior. This lack of humility is poisonous, and will never result in progress. So, any supporters of a good-sized club wanting to create the best atmosphere possible need to come together, ignore the cynics and doubters, chip in together to fund the activities and get creative.

Now, before you fall behind.

One thought on “The Taste of Things to Come”