A professional Football club with one of the liveliest fan groups across Europe is celebrating its 125th birthday tomorrow. If usual supporter behaviour is anything to go by, the celebrations are going to be fairly spectacular.

We do not think of the Swiss as being a particularly passionate bunch. Famed for its political neutrality during certain periods of European history when all other agents were anything but neutral, the uninterested reputation of die Schweizer is probably further emphasised by the country’s limiting geography.

Sat high on a hill away from larger conurbations in the nearby lowlands of Germany, Italy and France that are increasingly connected to and dependent on one another, the image of small Alpine towns and villages whose inhabitants work the land in the Summer and strap on the skis in the Winter dominates the way many imagine Swiss life. Boasting an economy that is surprisingly self-sufficient in the 21st century and some of the highest living standards in the world, it is easy to think that Swiss Men and Women would have little reason to concern themselves with anything happening outside of their valley. And it is certainly easy to imagine the contented Swiss as having little interest in starting fires, chanting fanatically and mobbing up at something as trivial as a sports event.

FC Basel’s Ultras and supporters however certainly demonstrate that this is not the case. 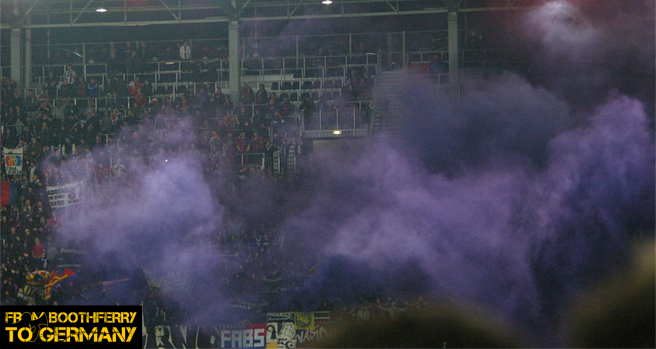 While Bern dominates politics and Zurich leads the country in terms of services, Basel stands out as Switzerland’s industrial capital. A lack of navigable rivers and an abundance of sharp inclines across the country has generally been a problem for trains and boats in the past, which has in itself been a hindrance to Swiss industrialisation. Yet Basel emerged in the 20th century as the centre of manufacturing inside the country. As the normal adage goes, industrial cities that attract low-skilled migrants boast stronger Football clubs in modern times as the terraces have a habbit of appealing to the unengaged and frustrated who struggle to find self-worth in their everyday lives. This handily explains why Basel has produced the Football club with the largest fan base in the country despite being only the third largest Swiss city in terms of population.

The club itself has come to expect frequent silverware. 2018 marks the first time since the 2008-09 season in which FC Basel has failed to win a trophy, their Hauptstädter rivals from Young Boys Bern pipping them at the post to win the Swiss Super League. This was a definite irk to the club’s supporters and Ultras, however their PR and marketing execs played a masterstroke of brand-building. The club payed for a full page advert in the main Swiss tabloid Blick in which it publicly congratulated Young Boys on their success and requested that they take good care of their silverware before returning it back to the Basel trophy cabinet a year later. Grasshopper Club Zürich (one of FCB’s main rivals) remain the most successful club in Swiss Football in terms of domestic honours, yet the emerge of FC Basel in the 21st century has been alarming to say the least; 12 of its 20 league titles have come in the last 15 years.

Success breeds sexy. FC Basel’s dominance in domestic Swiss Football and frequent appearances in international competition have certainly contributed to the club’s popularity in Switzerland; the club is the only one in Switzerland that consistently boasts home attendances upwards of 30,000. One can immediately expect a large and boisterous fan base to follow a club that is so cock-sure of its ability to win consistently. This undoubtedly further contributes to the standout reputation of FC Basel’s fans.

Switzerland’s is also unusual for a European nation thanks to its abundance of mother tongues. Beset by internal language barriers, one could argue that it is difficult for the Swiss to be patriotic thanks to the inability of residents of different Swiss regions to communicate. Speakers of German, French, Italian and Romansh may own similar passports but they will struggle to maintain a conversation with each other, resulting in a lack of glue that holds the nation together. Basel is located in the German speaking area of Switzerland. It can therefore be little surprise that fans of FC Basel share an affiliation with their counterparts at Eintracht Braunschweig and FK Austria Wien, two clubs from other German speaking nations.

However, followers of FC Basel allegedly share a strong connection with a one of the most famous and popular Football clubs in the world.

Choreographies and tifos displayed in the Mutterzerkurve predominantly feature the colours red and blue, as do the pyro shows of Basel’s Ultras and literally any article of fan merchandise sold at the club. This colour scheme is of course shared with Crystal Palace and in more recent times FC Bayern München, but the similarities that exist between FC Basel and FC Barcelona are striking; the two clubs even share the same initials. The role of the Swiss (and English) in the founding and early years of FC Barcelona is well documented. According to legend, FC Basel was the inspiration for the colours used in Barcelona’s kits going way back when, and a lot of industry know-how gathered by former employees at Basel helped Barcelona’s founders initially get the club up and running. Sadly however, any form of historical record that traces inspiration for the colours used in the Catalan club’s playing shirts directly to FC Basel is yet to be found.

It is something of a shame that FC Basel will not compete in another home fixture at the St Jakob-Park until the 2nd of December when none other than the Young Boys come to Basel. The Ultras will be forced to wait until that date before they can celebrate their club’s birthday in the Mutterzerkurve, but be ready when it does.