Another major international Football competition and not only fans but also businesses are making serious plans. So much attention from so many people from so many countries is an opportunity to make an easy buck. Hijack the upcoming tournament hysteria, change your product design with the event name & national colours and claim you’re backing the boys in the host country. Kerching.

But governing Football bodies are not going to allow non-affiliated companies to use their registered trademarks for their own sales purposes this summer. It’s in their interest to crack down on these freeloaders getting customers by using the summer Football hype. If their major sponsors saw other companies profiting by using the tournament name without paying sponsor rights, they would not pay for the exclusive sponsorship rights themselves. Therefore in order to protect their enormous pools of sponsorship revenues, these Football bodies create guidelines outlining the does and don’ts of advertising during the major international Football tournaments.

You don’t want to read the whole thing because it’s super long and actually not exhaustive (which gives these governing bodies the ability to take legal action against companies if they can find a case to do so), but to summarise, the guidelines frequently return to few key topics (we will take the fictitious country ‘Landia’ hosting the World Trophy of 2020). Advertising materials & sales promotions may not use any of the following elements:

The following elements may be used: 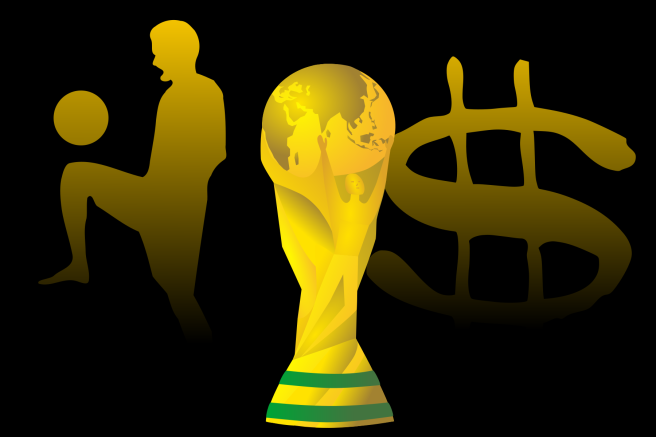 A company can sell t-shirts with ‘¡Viva Futbol España!’, but not with ‘Viva España Copa Mundial 2020’. A company can have a radio ad with the national anthem and ‘Support Our Boys’, but they cannot complete that with ‘in the Landia World Trophy this year!’. As you can see, there is not too much room to be creative here. There are two notable grey areas in these guidelines:

News broadcasters may use official event names and material in their published news & media content PROVIDED it forms an integral part of the news story. An article about the Landia 2020 World Trophy is perfectly allowed in the interest of free press & public speech; the body has no right to forbid news & media agencies from doing this. However, if they could, they probably would. We could in FBTG therefore talk at length about what goes on at an international Football event, provided we could prove it was all for sake of greatly public knowledge.

Major search engines do not allow companies to trademark search terms that web users look for, so you are free to advertise your business by ensuring your website appears when somebody types ‘Landia 2020 World Trophy’. However, there are informal mutual trust agreements between major digital advertisers that this form of bidding on other companies’ names is avoided in a ‘game theory’ kinda way. Companies are therefore always wary of bidding on names & events like these, but in this case increased attention from the lawyers of the governing Football bodies would be likely, so companies are not going to bid on these search terms this summer.

And what is the reason for these advertising guidelines? These bodies openly state that privately funded major international sports events necessitate money from corporate sponsors. If they do not clamp down on abuse of trademarked terms in sales and advertising, their sponsors would not pay the major sums. As a result, the wider Footballing world would suffer, as the funding for these giant Footballing competitions which they claim benefits millions of people would dry up. You can draw your own conclusions as to whether all this sponsorship money is well invested.