A 6-1 victory represents England’s best ever match result in World Cup competition and much cause to celebrate. The British press have been pretty low-ball up to this point. The Three Lions went into the cup with far less expectation than is normally the case. But England have objectively been one of the stronger teams so far in the competition, and with heavyweights such as Germany, Brazil and Argentina faltering, we seem to be steadily returning to the old pattern of delirious dreaming overshadowing rational expectation. How many “Football’s Coming Home” social media posts have you seen in the past 24 hours?

And maybe England will continue to perform well. It would be a welcome change for fans after a long period of disappointment in international Football competition. But with the United Kingdom currently standing at a crossroads as the country’s future political and economic ties with the European Union remain uncertain, a strong performance by the England Starting XI in the World Cup may be detrimental to the country’s long term well being.

The English obsess about their own greatness more than any other European nationality I can think of do. The country’s participation and role in WWII dominates the national identity to such a degree that many citizens remain ignorant of the abhorrent acts committed by the British Empire at other periods in time (for sake of convenience, we shall use “English” and “British” interchangeably for the following 2 paragraphs). That is quite a bold statement, but I really believe it. The Spanish are aware of the atrocities committed by Franco’s regime and are still coping with the damage caused by the Spanish Civil War. The Germans understandably feel reluctant to blindly believe in the concept of a benevolent German state, given the country’s history. The French learn about their country’s aggressive rule in Indochina, the Caribbean and Africa. These are European nations comparable to England whose former governments had colonial ambitions where citizens do not defiantly believe in their own country’s greatness. 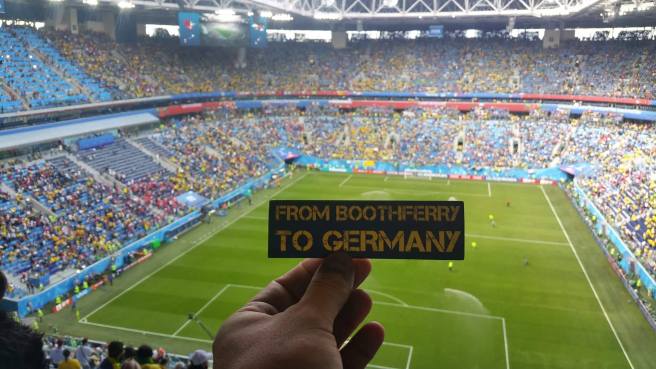 But while WWII and British involvement therein is studied comprehensively in primary and secondary schools, topics such as British rule in Ireland, the British involvement in the creation of Israel, British colonialism in India and the British conquest of Burma etc are overlooked and understudied. Over the 20th century, the English have written a narrative for themselves that tidily confirms their country’s greatness by focusing more on episodes of past English / British triumph and ignoring the acts committed in the name of the British crown that really cannot be justified in a modern world. The outcome is a culture that perpetuates a story of glory, pride and above all, greatness.

The country definitely led the world in 19th century politics, economics, commerce and technology (and military), but England just isn’t that great any more. It is a suspicion that many are finally, and begrudgingly, coming to terms with. Poor results by the English national team are helping the English appreciate their country’s diminishing importance; the mismatch between periodic Football cup expectation and actual accomplishment crudely serves as a painful example of the gap between the English expectation of greatness and the reality of a declining global importance.

But success this summer would further fuel the propensity of stubborn patriots and Leave voters alike to believe in England’s assured continual existence as a Great Nation that does not need help from any other. As the government continues to amble on with the Brexit process, it is now embarrassingly clear to all individuals capable of objective and rational thought that a future in which the United Kingdom cuts commercial and economic ties with the EU will leave everyone worse off. Hardline Leave campaigners are backtracking like never before and all economic indicators tell the story of a country that is increasingly losing influence in the world, now at an accelerating rate. Two years have seen a lot of humble voters realise the flaws in the Leave arguments. But at a critical time in governmental discussion on the topic, World Cup triumph may convince the public and MPs that England is indeed that great nation capable of surviving in a modern world without economic and political integration with its closest neighbours. Post-victory patriotism would envelop the country, blinding its press and encouraging its MPs behave riskily in the Brexit process.

England could indeed go far this summer on the Football pitch, but doing so would come at a mighty cost.