Every Football blog is now going overdrive as our sport’s most prestigious competition kicks off today. We are sure that you already have your bets made, your annual leave days booked, your travel plans arranged and your fingers crossed. But we offer our own predictions as to how the tournament will unravel in ways that may not have crossed your mind before.

Welcome to From Boothferry To Germany‘s Alternative Weltmeisterschaft2018 Predictions. Enjoy.

Iran is one of the top 15 countries in terms of ticket sales for the tournament, meaning the Islamic nation will be well represented by fans. Saudi Arabia not to the same degree, but in cheap, cheap Russia, visiting fans from the two conservative Islamic countries will take advantage of being outside of the watchful eye of their respective governments. That means one thing above all; drinking. Any fans travelling will likely indulge in such activities while they have the chance in spite of severe penalties for doing so, though we are unlikely to hear about it in the press.

The Poles will burn. The Icelanders will clap. The English will sing and the Italians…. oh no wait. But travelling fans of two of the smaller participating countries this year will likely surprise keen-eyed viewers with their exuberance on the terraces. Tunisians, many of which still feel resentment toward the UK due to recent British military action in the Arabic world, are likely to express themselves vehemently during their clash with England. And if rival Ultras of Wydad Casablanca and Raja Casablanca are able to put their rivalries on hiatus, the Moroccans will turn out in force, bouncing and chanting for the entire stadium. Though Tunisia and Morocco are unlikely to progress through the cup, their fans will be loud.

The Russian Football Union has imposed very severe penalties on anti-social behaviour conducted by fans during the tournament. But given the state of affairs at Euro 2016, there are going to be tales of violence among fans once again this Summer. Many will expect the English to “get their own back” after Marseille, but this is actually unlikely to happen, even though we are going to be delighted with tons of shakey smartphone footage of Brummies acting hard. The Poles will almost undoubtedly take the advantage of the location to do some damage against old enemy Mother Russia, and we may see some carnage from mobs from Croatia, Serbia, Germany, Denmark, France and Argentina. 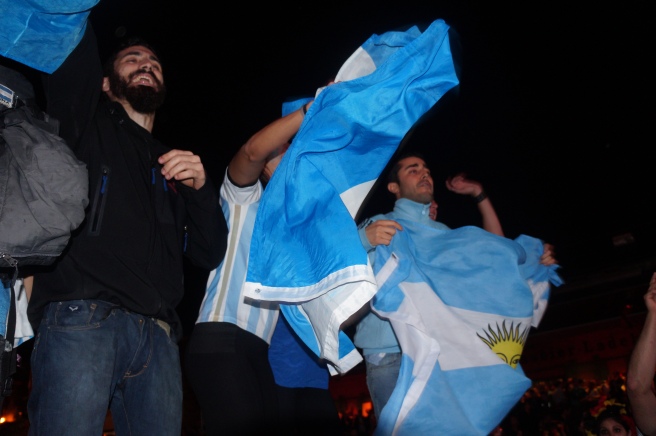 Which is realistically why this tournament is destined to be a failure for the host nation.

A lot of people, including ourselves at FBTG, see Russia as an inappropriate choice as host nation for a global sporting event thanks to ongoing human rights concerns, recent political and military intervention in foreign affairs and relative lack of press freedom. Hosting the 2014 Winter Olympics and now the 2018 WM are undoubtedly attempts by the Russian administration to win admirers and present a modern, ambitious and above all inclusive Russia to onlookers around the world. But it won’t work.

Several big name sponsors have already pulled out, putting FIFA in a difficult situation. We are unlikely to see macho visiting Football fans waving the Rainbow flag the same way the German Winter Olympiads did four years ago in protest of Russia’s general aggression toward the LGBT community. But the Russian authorities have been compelled to respond to the high possibility of hooliganism and organised violence between fans by introducing the aforementioned harsh punitive measures for antisocial behaviour. The result is a Catch 22, whereby a failure of the Russian law enforcement to prevent violence will harm the country’s ambitions to present itself as peaceful and safe, but an overzealous approach to fan-stewarding and police presence recorded by thousands of smartphones will confirm the stereotype of traditional Slavic authoritarianism.

The current Russian administration will exit the tournament looking even worse in the eyes of Western media.

But we’d like to end on a more positive note. We usually avoid discussing the actual Football in favour of celebrating fan culture, but we shall make a brief exception here. The climatic conditions of the tournament will be cool and dry. In Russia’s cool, dry evenings, humidity will not play the same role it did in Brazil. As such, fast-paced, high-tempo Football will be rewarded. Teams capable of playing at an accelerated pace for extended periods of time will be aware of the advantage they will have and shall play accordingly, resulting in fast games with a lot of box-to-box activity. Historically, the American teams have struggled to play fast Football, devoting more time and energy to a creative and improvisational style of play. The American teams are likely to struggle to keep up with dogmatic European sides who will use what has traditionally been a competitive advantage in conditions that Europeans are more accustomed to playing in.

We will see more goals being scored later in the games than usual as defenders tire. We will see more attractive dribbling and player movement. We will see the teams that are able to break quickly progressing, namely Germany, France, Denmark, Iceland and, who knows?, perhaps even England….

It would not be a predictions post without a bold prognostication of the ultimate victor. We will enjoy the month of sport as neutrals, watching many games as impartially as possible. But as we see it, the two sides most likely to meet in the final are Germany and Spain. Who would emerge victorious from this final? It depends entirely on the occasion.