The Football fan who prefers to go down the pub with his freshly washed Spurs shirt and chat all friendly with peers wearing Arsenal, Man City and Villa merch will maybe not know Union Berlin. The Football fan who is more invested in the politics of the sport and knows which fans suck and which fans are boss will definitely know Union. Berlin’s 2nd club playing at the infamous Stadion an der alten Försterei, a stadium partially built by the fans when the club needed to upgrade the facility but couldn’t afford to, 1. FC Union Berlin have a lot of sympathy from fans worldwide. Read up on our visit of a friendly when SV Austria Salzburg came to town. 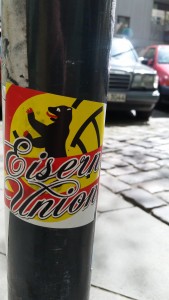 One thought on “Ultras Aufkleber of the Week – 1. FC Union Berlin”