It can be easy to forget Iraq’s diversity. Shia, Sunnis, Christians, Kurds, Arabs, Assyrians, Working Class and Middle Class in a country that has suffered more than possibly any other in the past 40 years. Lines in the sand drawn by British officers around a century ago cut through historic communities and forced together ethnicities and peoples that had little in common. A recipe for trouble, a lot of Middle Eastern commentators put blame on colonialism for the region’s political problems. It’s been hard to find a political system that wildly differing peoples agree on. Maybe this then contributes to the Iraqi peoples’ fierce love of Football.

That level of worship rivals what you see in places like Argentina and Brazil. Football represents the secular kingdom that gives Iraqis that moment to feel connected with one another outside of politics and conflict that plague everyday life. Iraqis sure can play, reaching the World Cup finals in 1986, making the Olympic games in 1980, 1984, 1988 and 2016 and becoming Olympic semi-finalists in 2004, winning the Arab Cup (1964, 1966, 1985, 1988), the Gulf Cup (1979, 1984, 1988), the Asian Cup in 2007 and the Asian Games in 1982. Indeed, Simon Kuper and Stefan Szymanski identified Iraq as the most successful Footballing nation relative to income per capita, population size and Football success. But, as happens time and time again, Football has been abused in Iraq by political despots. 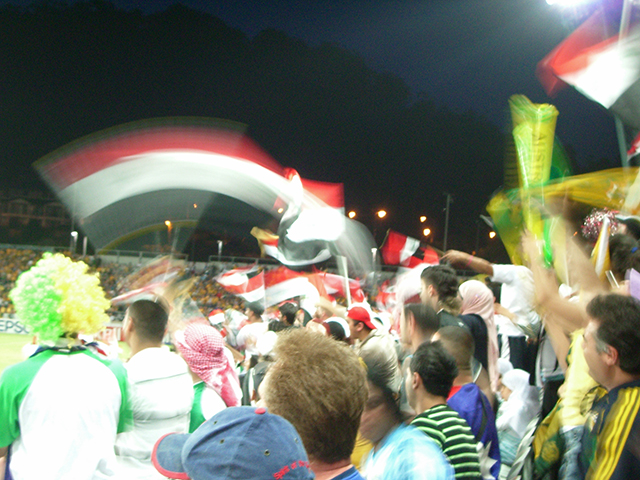 Uday Hussein was Saddam Hussein’s son who ran the Iraqi Football Association from 1984 and the Iraqi National Olympic Committee from 1985 to 2003 shortly before his death. Originally alongside Hussein Kamil and Sabah Mirza in earlier years prior to their defection from the regime, if you know his name you are right to. Uday governed Iraqi sport through sheer terror. As an individual he had a well-documented taste for sadism and cruelty and enjoyed using his status and power as member of the ruling Ba’athist party to bully and victimise beyond his wildest dreams without resistance. The stories of brutality and torture are truly unspeakable. One particularly nasty practice was to beat, whip or flog victims leaving lacerations on the body before forcing them to climb a 15 foot ladder, jump into a tank filled with sewage, bacteria and blood (in order to ensure the wounds would become infected), wade through it and climb back up again. Repeatedly. I won’t share a comprehensive list of methods but it is an A-Z of cruelty. But his position as the head of the IFA and the INOC allowed him to exercise these sick practices on sportsmen who displeased him, be it through disobedience or poor performance.

Uday and his cronies did not care for sport. They did not invest in people playing sport and did not care whatsoever about the wellbeing of anyone involved; they simply abused it. Bribery and corruption were rife thanks to harsh corporal and capital penalties for anyone who did not obey commands, as Uday and co. used Football and other sporting matches to gamble. One of the best examples of Uday’s selfish presence in sport is the Football team he created in 1983; Al-Rasheed.

Al-Rasheed was seemingly created on an absolute whim. No real contemporary objective or agenda was obvious for Uday to found the club, other than personal glory. The club was based in Baghdad and was given the club Al-Karkh’s ground (Al-Karkh would later be the club that would replace Al-Rasheed upon dissolution in the Iraqi First Division). Uday began building his own super team by pooling together the best players and staff available, including all of the contemporary Iraqi National players barring two; Hussein Saeed (one of Iraq’s all-time greats) of Al-Talaba, “the Students”, and Raad Hammoudi of Al-Shurta, “the Police”. Otherwise players who found themselves targets of Uday’s Al-Rasheed faced little choice but to join the team.

Al-Rasheed began with immediate promotion to the First Division and were very strong on the field throughout the 1980’s with back-to-back titles, even without help from the referees Uday had intimidated. But the team-strength did not guarantee the players’ happiness or security. They were frequently punished, often without reason. Beatings and imprisonment were common. Even on occasions when Al-Rasheed had triumphed. Forward Shakir Mahmood recalls scoring in a 2-0 victory over the Army team, yet still being gaoled after the game, allegedly because Uday had accused him of being too friendly to players on the opposing team.

The player-stealing meant that Al-Rasheed very quickly became the most despised team in all of Iraq. Fans of other major teams such as Al-Zawraa, the Air Force, Al-Shurta, Al-Minaa and Al-Talaba would jeer the Al-Rasheed players openly on the streets, accusing them of cowardice (in a country where physical bravery is valued highly). And on the terraces the wrath of the fans toward Al-Rasheed was immense. 50,000 angry voices at each game frustrated Uday massively who otherwise got his way throughout his life. This is another example of Football’s huge impact as an agent in political history by providing a safe zone for the oppressed to express discontent at totalitarianism, as we have seen in the Basque Country, Yugoslavia and East Germany. Fans were incapable of preventing bribery, intimidation and corruption. Fans were incapable of complaining to the IFA (i.e. Uday) directly. But with safety in numbers, fans could let Uday Hussein know just what they thought of his team and his management of Iraqi sport.

Al-Rasheed died long before the Ba’athist party’s rule did in 2003. The club was disbanded in 1990 when it was only 7 years old, with its First Division spot handed to Al-Karkh, whose stadium they had originally pinched. I haven’t found much contemporary explanation for the disbanding of the club. The general belief is that Saddam, tired of the continuing resentment of the Iraqi people to Al-Rasheed, ordered Uday to close the club. The off button seems to have been pressed at just as much of a whim as it was originally switched on.